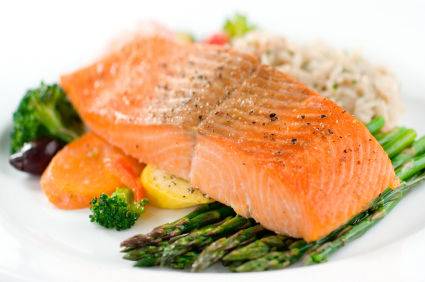 Over the last couple of decades, the practice of farming fish, or aquaculture, has increased exponentially. Farmed Atlantic salmon production in particular saw a more than 30-fold increase between 1987 and 2012, according to the Food and Agriculture Organization of the United Nations. This increase comes at a time when wild fish stocks have plummeted rapidly (just ask any local salmon fisherman), a trend that is likely to continue. This makes Americans’ deeply dissonant attitude toward salmon even more troubling: we love to consume it, but many of us hate to have it farmed. Rife with chemical and environmental concerns, does farmed salmon deserve its fishy reputation, or is it a viable alternative to the diminishing supply of wild-caught salmon?

From a nutritional perspective, both farmed and wild salmon are loaded with protein. But, according to the USDA, farmed salmon has about twice the fat of its wild relatives (27g versus 13g per serving—wild fish do exercise more after all), and thus contains more calories and saturated fat. While farmed salmon contains slightly more omega-3 fatty acids, it also contains a much higher amount of omega-6—the omega-6:omega-3 ratio is about three times higher in farmed salmon, compared to wild, which many scientists believe could drive an increase in inflammation and play a role in chronic diseases. Wild salmon contains more vitamins and minerals than farmed salmon though, including iron, calcium, potassium, and zinc, according to the USDA.

The differences in taste are distinct as well. Wild salmon, though more expensive, has a leaner, firmer, more steaky texture, and a stronger, more “ocean-like” flavor. The taste of farmed salmon is often described as milder and more delicate. But even high-end fine dining restaurants feature the farmed version, like renowned fish chef Eric Ripert, who serves farmed salmon at his New York restaurant Le Bernardin.

Just because it tastes good, though, doesn’t necessarily mean we should be putting it in our bodies, or fueling its demand with our wallets. The profound differences between wild and farmed salmon go much deeper than the plate—to the environments in which they are raised. Farmed salmon are most commonly grown and held in the ocean in open-net pens, with farms being comprised of several pens anchored next to each other, usually near the coast and in sheltered bays. These farms can be the size of multiple football fields and hold up to a million fish. Because of these close quarters, illness is common, so they are often given antibiotics, in addition to growth hormones.

Because wild salmon live in the open ocean and eat a natural diet, they contain much fewer contaminants than farmed salmon. In particular, compounds known as PCBs—polychlorinated biphenyl—which may cause cancer and other health problems are significantly higher in farmed salmon. The issue gets even murkier though, because the FDA (Food & Drug Administration) deems these contaminants in farmed salmon to be at a safe level, whereas the Environmental Protection Agency (EPA) disagrees. And, depending on the location and practices of each salmon farm, these contaminant levels vary widely.

On the macro level, pollution from salmon farms can have a significant negative impact on the environment, starting with the excess feed and fish feces produced by salmon farms, which not only saturate the pen in much higher amounts than would ever occur in the wild, but also pollute the surrounding ocean. Another issue is the spread of various salmon diseases—especially a parasite known as sea lice that can threaten entire populations. Parasites and other diseases can be kept in check by administering antibiotics and pesticides, but what impact do these chemicals have on the surrounding ecosystem? And what if a fish (or thousands of fish) escape from a pen? They can not only spread disease to the wild populations, but also compete with them for food and habitat. When a farmed Atlantic salmon and a wild Pacific salmon breed, you get the salmonid equivalent of a pony: an infertile halfling that only further dilutes the wild population. Some studies have found a correlation between salmon farms and decreased local wild populations, but this is confounded by the fact that wild populations are also dwindling in places where there are no salmon farms.

Something else people may want to know is that farmed salmon are fed compounds that turn their flesh pink like a wild salmon, as well as fish meal pellets partially made from forage fish like anchovies and sardines, which are themselves seeing worldwide population numbers dwindle. Salmon farms are working to improve their feed conversion ratios, with some switching to more vegetable-based feed—but this could lead to less omega-3 fatty acid levels, a major reason why salmon is so healthy and desirable in the first place. There is even a Canadian company that has created a GMO salmon (cue squeamishness now) which grows twice as fast even though it eats 10 percent less food and is heartier and more-disease resistant than other farmed salmon.

Getting a grasp on the complex issue of salmon farming is like trying to grab a fish out of the water with your bare hands: slippery. But worldwide fish fervor and demand for seafood—driven primarily by U.S., Japan and Europe—is skyrocketing at a time when wild supply is diminishing. So what are humans to do?

There is a glimmer of hope on the horizon for the future of safe and responsible fish farming. The World Wildlife Fund (WWF) has established a committee called the Aquaculture Stewardship Council (ASC). Their main goal is to create and uphold sustainability standards for fish farming all across the globe. For a salmon farm to be ASC certified, it must meet strict standards with respect to all aspects of fish farming including water quality, biosecurity, pollution, escaped fish, contaminants, parasites and disease, feed conversion, and transparency of farming practices. All of the world’s top producers of farmed salmon have signed on to uphold these standards and aim to be compliant by 2020.

The Monterey Bay Seafood Watch program, a leading voice in seafood sustainability, lists nine “best choice” designations for salmon—which includes five farmed sources and four wild-caught. They also designate seven “good alternatives” and five to “avoid”—all of which are farmed in net pens. Visit seafoodwatch.org for more information on all different types of fish and farmed seafoods and their varying degrees of environmental impact.