Posted by archerzhh on Monday, 11 May 2015 in Recycling 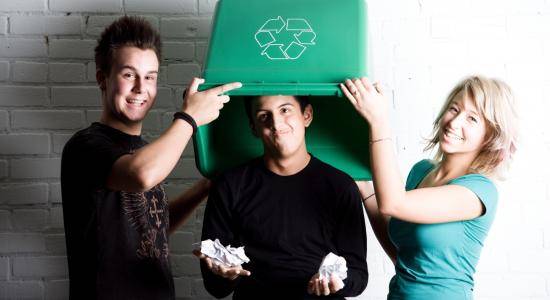 1. The average person generates over 4 pounds of trash every day and about 1.5 tons of solid waste per year.

2. Americans make more than 200 million tons of garbage each year, enough to fill Busch Stadium from top to bottom twice a day. Next time you’re at a sporting event or tailgate, host a trash-free tailgate using only recyclable materials Sign up for Trash-Free Tailgate.

3. The EPA estimates that 75% of the American waste stream is recyclable, but we only recycle about 30% of it.

4. We generate 21.5 million tons of food waste each year. If we composted that food, it would reduce the same amount of greenhouse gas as taking 2 million cars off the road.

5. Recycling one aluminum can saves enough energy to listen to a full album on your iPod. Recycling 100 cans could light your bedroom for two whole weeks.

6. The Container Recycling Institute (CRI) estimates that the 36 billion aluminum cans landfilled last year had a scrap value of more than $600 million.

7. Americans throw away about 28 billion bottles and jars every year.

8. Over 87% of Americans have access to curbside or drop-off paper recycling programs.

9. In 2009, Americans threw away almost 9 million tons of glass. That could fill enough tractor trailers to stretch from NYC to LA (and back!).

11. A glass container can go from a recycling bin to a store shelf in as few as 30 days.