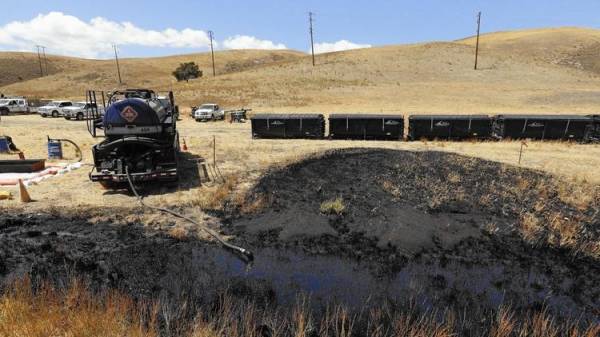 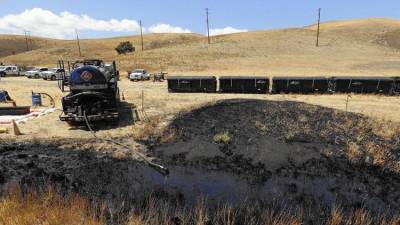 The oil pipeline rupture at Refugio State Beach may have spilled as much as 105,000 gallons of crude, authorities said. (Al Seib / Los Angeles Times)

Plains Pipeline, the large Texas-based company responsible for the pipe that ruptured in Santa Barbara County, has accumulated 175 safety and maintenance infractions since 2006, according to federal records.

A Times analysis of data from the Pipeline and Hazardous Materials Safety Administration shows Plains' rate of incidents per mile of pipe is more than three times the national average. Such incidents may include problems with pipelines, storage tanks and drains, among others. Among more than 1,700 pipeline operators listed in a database maintained by the federal agency, only four companies reported more infractions than Plains Pipeline. 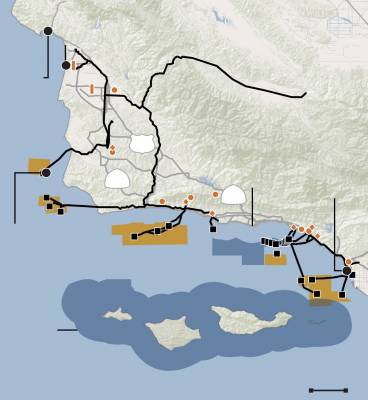 The company, which transports and stores crude oil, is part of Plains All American Pipeline, which owns and operates nearly 18,000 miles of pipe networks in several states. It reported $43 billion in revenue in 2014 and $878 million in profit.

The company's infractions involved pump failure, equipment malfunction, pipeline corrosion and operator error. None of the incidents resulted in injuries. According to federal records, since 2006 the company's incidents caused more than $23 million in property damage and spilled more than 688,000 gallons of hazardous liquid.

A Plains Pipeline spokesman did not immediately respond to a request for comment about its regulatory record.

In a statement Tuesday night, the company said it was working with authorities to contain the damage caused by the rupture in Goleta.

"Plains deeply regrets this release has occurred and is making every effort to limit its environmental impact," the statement said. "Our focus remains on ensuring the safety of all involved. No injuries have been reported at this time."

The spill near Refugio State Beach occurred Tuesday on an 11-mile-long pipeline that is part of a larger oil transport network centered in Kern County. Authorities say the accident may have released as much as 105,000 gallons of crude oil.

The company said it inspected the pipeline's integrity two weeks ago. But the results had not come back before the rupture, Darren Palmer, Plains' district manager, said at a news conference.

Before that inspection, the last review of the line, which can pump up to 6.3 million gallons of oil per day, was in 2012, according to the company.

California's 6,000 miles of oil pipelines are regulated by the U.S. Department of Transportation and the state fire marshal. Before 2013, the fire marshal's office managed the 2,000 miles of interstate pipelines for the federal department, monitoring, inspecting and reviewing company records. Now, the federal government oversees those pipelines, including the one that failed this week.

Bob Gorham, the division chief for pipeline safety for the state fire marshal, said his agency relied on the companies' extensive records and on scheduled inspections, "at least one every two to three years."

The pipes, generally constructed of high-strength carbon steel, are continually monitored by a computerized system that relays flow and pressure data from remote points to a central monitoring station, staffed by Plains Pipeline employees.

Over the last 10 years, the Pipeline and Hazardous Materials Safety Administration, which is part of the Department of Transportation, has assessed $115,600 in civil penalties against the company for violations that include failing to maintain adequate firefighting gear and relying on local volunteer fire departments.

Plains Pipeline has also been cited for failing to install equipment to prevent pipe corrosion, failing to prove it had completed repairs recommended by inspectors and failing to keep records showing inspections of "breakout tanks," used to ease pressure surges in pipelines.

The U.S. Environmental Protection Agency cited the company for violating the Clean Air Act at a storage facility near Taft, in Kern County. The agency said the company did not obtain the appropriate permits and equipment. That enforcement notice was sent 2 1/2 weeks ago.

Carl Weimer, executive director of the Pipeline Safety Trust, an advocacy group that promotes fuel transportation safety, said he was surprised that the company had reported so many incidents per mile of pipe.

"They usually have more money and more experienced personnel, so it's concerning when they're doing worse than the national average," Weimer said.