Posted by jonehopp on Monday, 15 June 2015 in Earth Violators 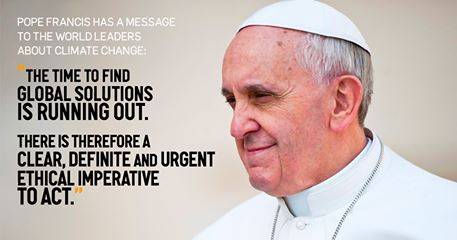 Pope Francis is once again rattling the already frayed nerves of conservative Catholics and just about everyone else.

With his long-awaited and potentially groundbreaking encyclical on the degradation of the environment and poverty expected to be made public as early as this week, and with unprecedented addresses to the United Nations and the U.S. Congress on what will almost certainly be closely related topics scheduled for the fall, even the devoutly Catholic American Republican presidential hopeful Rick Santorum felt the need to weigh in.

A climate change denier himself who once remarked that “climate science” was more like “political science,” Santorum advised the immensely popular Pope, whom he was careful to say he loves, to leave science to the scientists and focus on what Popes do best — moral instruction.

To make matters worse, with his unflinching defence of the poor and powerless, and with the beatification (a step toward sainthood) of Oscar Romero, the Archbishop of San Salvador, El Salvador who was assassinated by a right-wing death squad in 1980, Pope Francis appears to be giving a green light to an activist liberation theology that has been out of favour for decades.

Even though political conservatives in the U.S. have relied on the Catholic Church’s views on abortion and homosexuality for years, it should come as no surprise that Pope Francis would take a strong and progressive stance on climate change and the environment. After all, when Jorge Mario Bergoglio ascended to the Throne of Peter in 2013, he took on the name of the 13th-century monk St. Francis of Assisi, citing the saint’s intense connection, not just to the impoverished and the afflicted but to all of creation. (St. Francis’ justly famous poem, “The Canticle of the Sun,” addresses the earth and all of its creatures, the sun, moon and stars, and even the air and the clouds, as family members, intimates, with whom we have close emotional and moral relationships.)

And Pope Francis is not the first Pope to address our troubled and increasingly destructive relationship with the world we live in — so did both of his immediate predecessors. Pope John Paul II, for instance, touched upon these issues in an encyclical in 1991, and Benedict XVI addressed them in more sustained and rigorous detail in 2008, arguing that destroying the environment increases the suffering of the poor and undermines the lives of future generations, shows disrespect for a creation whose purpose is to serve human ends, and finally, that an exploitative relationship to the environment is likely to spill over into an exploitative relationship to other human beings, especially the poor and the powerless.

The trouble with Benedict XVI’s position, and with much of the broader, secular discourse on climate change and the environment, is that it assumes that our “dominion” over and “stewardship” of the earth is principally a matter of using its bounty in a responsible and sustainable way, and that the primary moral issue at hand is between human beings and not between human beings and the earth itself.

In other words, Benedict XVI’s position was anthropocentric and in many ways economic: the problem with destroying the environment is that it causes human beings to suffer, and that it will in the future affect the way all of us live, and our ability to inhabit the earth at all.

Many hope that Pope Francis’ forthcoming encyclical will shift the nature of the discussion, the paradigm on which it is based, and not just for believing Catholics. And there is abundant evidence that it will do just that. In a recent exhortation, for instance, he said that “Thanks to our bodies, God has joined us so closely to the world around us that we feel the desertification of the soil as a physical ailment, and the extinction of species as a painful disfigurement.” Here, Pope Francis seems to be suggesting that the wanton and irreversible destruction of the environment is a moral failure — a sin — in and of itself.

In affluent Western societies where politicians, and most of the rest of us for that matter, have deluded ourselves into thinking that climate change is a technological and economic challenge (perhaps better regulations and clean energy will solve it without our having to change our lives or attitudes), Pope Francis may be offering an urgently needed moral wake-up call.

In a way, Rick Santorum was right: the Pope is at his best when he focuses on moral issues. And whether you think the universe was created by a god or emerged as the result of a purely physical process, climate change is one of the great moral issues of our time.