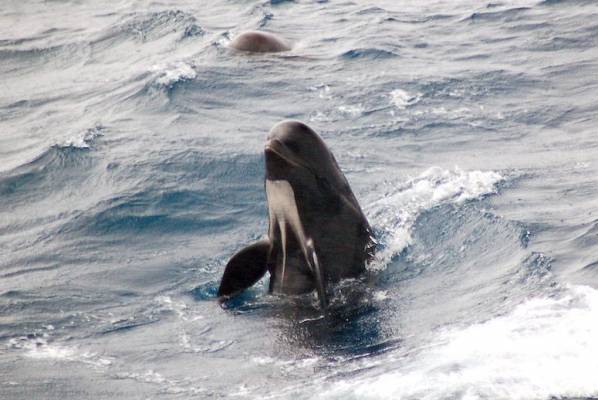 The Faroe Islands, a North Atlantic archipelago, have put a new twist on the phrase “If you see something, say something.” But it has nothing to do with terrorism.

In June, the parliament of the Faroes, an autonomous region owned by Denmark, approved a measure mandating that tourists report sightings of whale and dolphin pods to local authorities.

Critics such as Sea Shepherd Global, which monitors and tries to interfere with the annual whale hunt in the Faroe Islands, known as thegrindadráp, say the law was created to help whalers drive the animals toward shore, where they are slaughtered for meat and blubber.

So, Why Should You Care? Whale grinds are permitted in 22 Faroese bays, where up to 120 pilot whales can be killed at a time. According to Sea Shepherd, 1,200 pilot whales are killed during the hunt season in the Faroes.

Visitors who fail to report sightings are now subject to fines of up to 25,000 Faroese króna, or about $3,550, and two years in jail. The law also increases penalties for trying to interfere with the grindadráp.

Faroese law enforcement officials called Sea Shepherd leaders into meetings and warned them about the new legislation and penalties. According to Rosie Kunneke of Sea Shepherd Global, the land team leader for the group’s summer anti-whaling campaign, Faroese officials told Sea Shepherd that any volunteer who injures a dolphin faces up to 10 years in prison.

Last summer, several Sea Shepherd volunteers were arrested for allegedly trying to interfere with the hunt.

“We can go to jail if an animal is harmed as they are being driven to their death,” Kunneke said. “It doesn’t even make sense that you can send somebody to jail for trying to protect life.”

Whale watching is a tourist attraction in the Faroes, but the new law could drive visitors away, Kunneke believes, especially as any boat—including a whale-watching vessel—can be forced by grindadráp foremen to participate in driving whales to shore.

Rannva Solheim, a legal adviser at the Faroese parliament, confirmed that the law is in effect.

“There is a penalty if visitors don’t tell officials about seeing whales,” Solheim said. “Not reporting it is considered gross negligence.”

She said she doubted that anyone failing to report a sighting would receive the maximum penalty of two years’ imprisonment.

Sea Shepherd says that its vessel Sam Simon is heading to the islands to deploy sonic devices that may divert whales from the shore. Kunneke declined to say whether Sea Shepherd will comply with the mandatory reporting rules or the ban on interfering with the hunt.