Posted by tina on Monday, 13 July 2015 in Wildlife Conservation

What We Learn From Bees 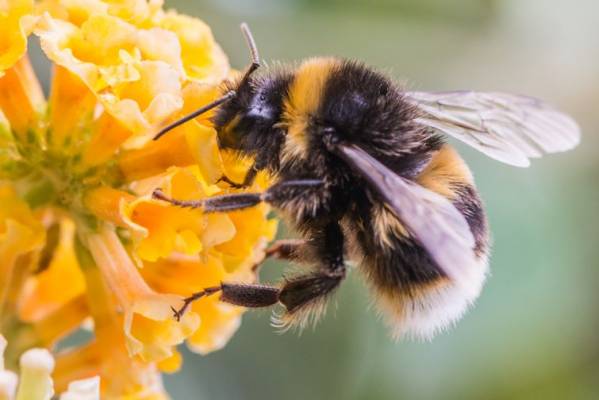 If you ask most experts why we should worry about all those honeybees and wild bees that are famously dying off, they'll often give a simple answer: because bees pollinate so many of our crops.

Without bees flitting from flower to flower, spreading pollen as they go, we wouldn’t have bountiful harvests of apples, berries, melons, almonds, and cherries each year. Bees are worth literally billions of dollars. If they vanished, our grocery aisles would suffer greatly.

It’s a compelling reason to care. Except, as it turns out, that's also not the whole story. Recently, in a fascinating paper published in Nature Communications, a team of scientists discovered that only a small fraction of bee species do most of the pollinating that’s so crucial to our food supply.

That doesn’t mean all those other endangered bee species aren’t valuable — they are. There's more to the value of bees than dollars and cents. We just have to think a little harder about a question that has occupied conservationists for decades: What makes a species worth saving?

Broadly speaking, farmers around the world rely on two types of bees to pollinate their agricultural crops. First, there are domesticated honeybees, managed by beekeepers and often transported from field to field to provide pollination services. In the United States, honeybees have gotten a lot of attention because they’ve been dying off at elevated rates — likely due to a mix of parasites, pesticides, and poor diets — and beekeepers have had to work furiously to rebuild hives each year.

Second, there are thousands of species of wild bees out there, such as bumblebees, that also pollinate flowers and crops all over the world. These bee species aren’t as well studied, but they appear to be just as crucial for pollination. Unfortunately, they’re also dying off, because of shrinking habitats and other stresses.

This new Nature Communications study is about wild bees. A team of researchers, led by David Kleijn of the Center for Ecosystem Studies in the Netherlands, looked at 90 studies on wild bees spanning five continents and 1,400 agricultural fields. Intriguingly, they found that these wild bees are just as valuable for crop pollination as managed honeybees are — contributing $3,215 per hectare to the production of crops, on average.

In other words, wild bees are valuable for our crops. But it’s only a handful of species that account for most of that economic value.

So how should we think about this study? One possibility is that if we’re worried about our food supply, we only really need to worry about protecting a handful of wild bee species — that 12.6 percent or so that are doing all the work. Maybe we should focus on saving those species, and not worry too much about the rest.

Well, no. The authors of the paper argue that this view would be incredibly shortsighted.

It's true that only a small number of wild bee species appeared to be crucial for pollinating the 40 crops under study. But this study is only looking at present-day conditions. In the future, having a more diverse array of bee species could help provide insurance for crop pollination. If some key bee species decline — say, because their ranges shrink due to climate change — then others could step in and take their place. Greater bee biodiversity can make the whole system more resilient.

What’s more, even those wild bees that aren’t pollinating crops at all may still be providing valuable services in the wild — we just haven't studied those services yet, or slapped a dollar value on it.

"If you lost all those pollinators that aren't pollinating crops, we’d start losing a lot of native plants across Europe and North America," says Rachel Winfree, an ecologist at Rutgers University and a co-author of the Nature Communications study. "If you start losing a lot of plant species, ecosystems can start collapsing. That can have all sorts of very negative effects, even if we can’t estimate it exactly. We're only at the beginning of this quantification process."

Therein lies one lesson of this wild bee study. We can put a dollar value on some of the "ecosystem services" wild bees provide, like pollination. That might help motivate people to take action to save bee habitats. But it can’t be the whole story. If you only focused on the dollar value of pollination, you’d assume that most wild bees out there just aren’t that valuable — a dangerous assumption.