Posted by archerzhh on Monday, 13 July 2015 in Environmental Heroes 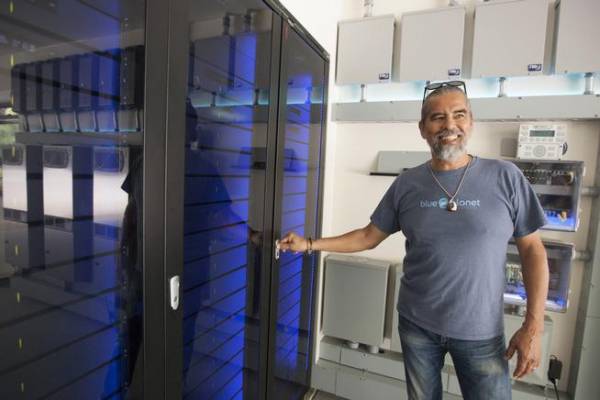 HONOLULU — High above this bustling city — in a quiet, exclusive hillside neighborhood where some of the island's wealthiest residents live — there is an extravagant home that's not quite like the others.

The 6,000-square-foot house has a view overlooking Diamond Head, Waikiki and the Pacific Ocean, and two Tesla cars in the driveway.

It's not the two electric cars that set the property apart from its swanky neighbors.

The difference is that this solar-powered home is completely energy independent.

Homeowner Henk Rogers, 61, hopes the technology he is using in his home can help make other homes across Hawaii — and the world — energy independent as well.

Rogers is famous for discovering the video game Tetris more than 20 years ago. He manages the worldwide rights for the game along with his business partner, Alexey Pajitnov, who wrote the program.

"If you're going to clean up the world, first of all you have to clean your own room," Rogers said, referring to Hawaii, which has some of the highest energy costs in the nation.

The new venture, which will sell and install battery systems for homes and businesses running on solar technology, plans to begin sales Aug. 1.

He declined to say how much the systems would cost but said there will be a five- to seven-year return on the investment for a typical project that his company will install.

The Blue Ion system, which Rogers has been testing in his home for the past year, uses Sony lithium iron phosphate batteries, which can last for 20 years and do not require cooling, he said.

Partnering with Sony, Rogers said he thinks the batteries can be a solution to the long-standing problem of storing the sun's energy and helping lower energy costs in Hawaii.

Sony has been developing lithium ion batteries since 1991, and the units being used in Rogers' home are top of the line.

The batteries store energy from solar panels, allowing people to use it at night without having to rely on expensive energy from the grid.

Rogers' company will sell and install the battery systems for commercial and residential use, supplying everything from the housing to the software to monitor and maintain the systems.

Robert Harris, a spokesman for the Alliance for Solar Choice, an advocacy group, said consumers haven't had much call to invest in battery-storage systems because of the cost and incentive programs that encourage people to stay linked to the grid.

Harris, who is also the director of public policy at Sunrun, a solar equipment supplier in Honolulu, said homeowners with solar panels typically put energy into the grid and take it back as needed, something called net metering.

"A lot of energy can be put into the grid right now, so it hasn't been a big incentive necessarily for a homeowner to invest in storage," Harris said. That could change in the next few months, when several new systems in addition to Rogers' are expected to hit the market.