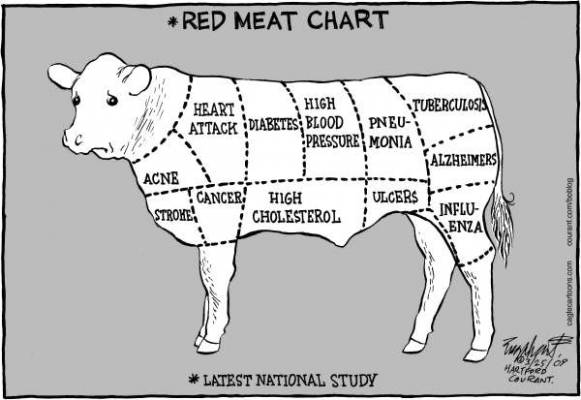 Meat consumption is causing climate change so what will it take to get people to eat less meat?

The question refers to the fact that the meat and dairy industries are a major cause of climate change, so why are people still so stuck on supporting them? Even if we all left the lights on 24/7, the damage could not compare to the toxic pollutants that drain into the water as a result of our reliance on animal products. We try to persuade ourselves that we are victims, helpless to do anything about this, and not the cause of the next mass extinction. Why be the victims and not the heroes? Why is it that people who have children do not want the best future possible by changing their families’ diets? People say how much they love their children, yet denial, convenience and habit come first.

Remember Al Gore's documentary An Inconvenient Truth? Like everyone else, he refused to talk about mistreatment of animals as well as all the cow, pig and chicken discharge that is killing this planet at accelerated rates.

In defence of Mr. Gore, he did smarten up and realize that his documentary missed the punchline and went vegan a few years back. Unfortunately, that got very little media attention. He should have made his point a long time ago.

Waking up the walking dead is going to be even harder with all the summer events that serve only meat, dairy and junk food and which glorify good cooking only if it includes heated-up salmonella and E. coli. This reinforces the wrong message time and time again.

It is time to stop running around waiting for the next meat injection and get real about the planet and the people and animals in it.