California isn’t the only state with water problems 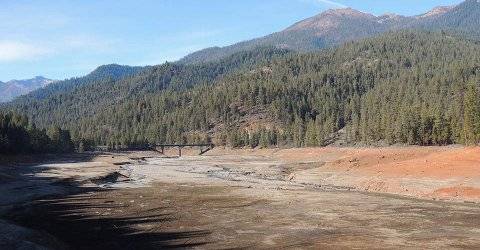 Americans tend to take it for granted that when we open a tap, water will come out.

Western states have been dealing with water problems for a while, but they won't be alone for long.

As drought, flooding, and climate change restrict America's water supply, demands from population growth and energy production look set to increase, according to a report from the U.S. Government Accountability Office.

These two changes squeeze our natural water reserves from both directions. The stress is becoming clear and will soon manifest as water scarcity problems all over our country.

Over the last four years, Californians have gotten a big wake-up call, as drought forces them to reconsider water as a scarce commodity.

The Metropolitan Water District of Southern California, the region's water supplier, will deliver 15% less water to cities in the greater Los Angeles area starting in July. The supplier won't cut off delivering water if demand is more than the quota, but it'll charge local utility companies that sell residents water up to four times more than the normal rate for the excess. And naturally, the utility companies will pass the cost on to their customers.

The water companies' cuts are a reaction to California Governor Jerry Brown's executive order that cities throughout the state reduce the amount of water they use by 25% — a groundbreaking mandate from the Governor's office to limit water use for the first time ever.

While the rest of the US hasn't been ordered to reduce water use, that doesn't mean we have a free pass to use as much water as we want. Many states — 4o out of 50 according to the U.S. Government Accountability Office — have at least one region that's expected to face some kind of water shortage in the next 10 years.

Water managers in 40 our of 50 states expect shortages in some part of their state within the next 10 years.

In some cases, shortages happen when there's not enough fresh water suitable for human use in the lakes, rivers, reservoirs, and aquifers we can access. Rain and snowfall does replace the water we take from these sources, but that refill takes time and depends on actually getting precipitation. Drought-stricken California, for example, has a much reduced snowpack this year compared to 2010, its last near-normal year. Less snowpack means less snow to melt and refill the state's reservoirs with fresh water people can use.

According to Tim Davis, the Montana Water Resources Division administrator, a water shortage could strike any part of the state in any given year, Elaine S. Povich reports for the Pew Charitable Trusts.

Water demand in Montana just keeps increasing, the state's 2015 State Water Plan says, while the amount of water available changes from year to year, and even within a year, depending on precipitation. The discrepancy between demand and availability means the state is likely going to encounter a water crisis in the next few years. The state is already making contingency plans for potential drought conditions in the future, Davis told Povich.

In coastal areas of the US, rising sea levels taint fresh water coastal aquifers with salt water, which means that water can't be consumed anymore without expensive desalination treatment. This is a looming threat for eastern and southern Maryland, according to the Government Accountability Office report.

Those worries are compounded by population growth in central and southern Maryland, which is putting pressure on the water supplies there. Though water managers in Maryland don't anticipate statewide shortages, they told the GAO some areas may struggle to find enough water for everyone moving in, because there isn't a feasible way to dramatically increase the amount of water available. So even those of us who live in parts of the country not experiencing drought could stand to put less stress on our water supplies.

In Colorado, officials told the Government Accountability Office they're keeping an eye on the effects of fracking on the state's water supply. Using water for fracking could contribute to local shortages in the drought-prone state, which only gets 12-16 inches of precipitation every year. Plus, a previous GAO report highlighted the risk that fracking can contaminate the water supply so people can't use even the water they normally could.

Also out West, the U.S. Census Bureau projects the populations of Nevada and Arizona will more than double between 2000 and 2030. But those two states get some of the nation's lowest amounts of precipitation, so more people will be vying to use water resources that already aren't plentiful.

While any given person may not be directly causing these water issues, everyone plays a role in how much drinkable water there is in the US. The U.S. Geological Survey estimated that the average American used 88 gallons of water per day in 2010, the latest year it surveyed water use.

The entirety of humanity in America uses 27,400 million gallons per day around the house, for stuff like preparing food, washing clothes, flushing toilets, and watering lawns.

The map below from the U.S. Geological Survey shows how that breaks down by state on a daily basis, which doesn't even include the water that goes into producing the energy, food, and products we use. (For example, it takes over a gallon of water to grow a single almond.) 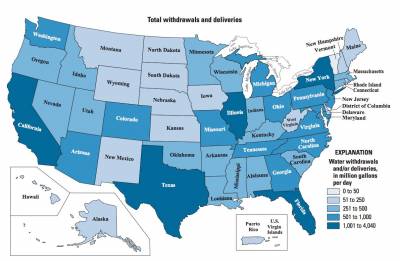 This isn't just a US problem, either. The water crisis is even worse in many other countries, especially those without good infrastructure to get water from rivers and aquifers. The UN estimates a fifth of the world's population lives in an area where water is scarce, and another fourth of the world's people don't have access to water because countries lack the infrastructure to distribute it.

By 2030, nearly half of everyone in the world will be living in countries highly stressed for water, according to UN predictions. Bank of America Merrill Lynch reports that water scarcity is our biggest problem worldwide, and projects that climate change will only make it worse.

Ready access to water is not something everyone in the world can take for granted, and Americans may not be able to much longer.