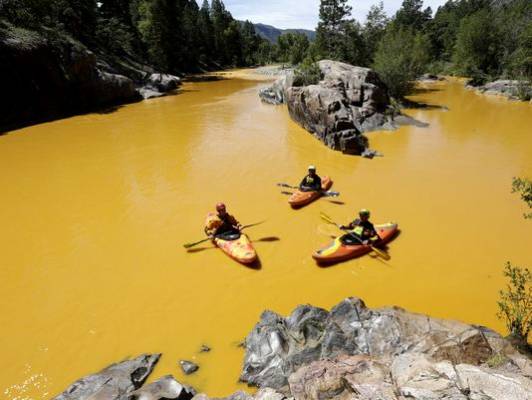 The Environmental Protection Agency took responsibility Friday for inadvertently polluting a Colorado river with 1 million gallons of toxic orange wastewater while trying to clean up an abandoned gold mine.

The spill occurred Wednesday morning at a long-closed Gold King Mine near Silverton, Colo., and fouled the Animas River, a 126-mile-long tributary of the San Juan River, part of the Colorado River system.

Durango stopped pumping water out of the river to keep from contaminating the city reservoir, and a stretch of the Animas was closed Thursday. Officials are monitoring the flow as it heads toward New Mexico and Utah.

At a community meeting Friday afternoon, EPA officials reported that water samples contained heavy metals, including lead, arsenic, cadmium, aluminum, copper and calcium, plus sediment. They did not discuss possible health or environmental impacts but said water quality was improving and there appeared to be no immediate health hazard.

EPA officials said although most of the contamination had moved through the Durango area Friday, the river would remained closed.

"We are very sorry for what happened. This is a huge tragedy," Dave Ostrander, who handles emergencies for the EPA's Denver-based Region 8, told the Durango residents.

"It's hard being on the other side of this," he added. "Typically, we respond to emergencies, we don't cause them. ... It's something we sincerely regret."

The disaster happened as the EPA began work to pump wastewater out the leaking mine, which first opened in 1887, and treat it in containment ponds. After an EPA-supervised crew excavated the entrance of the mine, a small trickle of dirty water quickly became a wall of acidic sludge that poured out for an hour into a nearby creek that empties into the Animas.

The EPA began the work because the mine had been leaking into the waterways.

The agency was criticized for its initial response, which downplayed the extent of the spill and minimized the impact on water quality and fish already "impaired" from mine pollution. At the confluence of the Animas and the San Juan is a designated critical habitat for the Colorado Pike Minnow and the Razorback Sucker.

"Endangered species downstream of this spill are already afflicted by same toxic compounds like mercury and selenium that may be in this waste," Taylor McKinnon, of the Tucson-based Center for Biological Diversity, said in a statement Thursday. "These species are hanging by a thread, and every new bit of toxic exposure makes a bad situation worse. EPA's downplaying of potential impacts is troubling and raises deeper questions about the thoroughness of its mine-reclamation efforts."

"Our initial assessment of it was not appropriate in that we did not understand the full extent of what we were looking at," he told the Durango audience. "Some of our earlier comments may have sounded cavalier about the public health concern and the concern for wildlife. I want to assure you that the EPA absolutely is concerned."