Posted by archerzhh on Saturday, 05 September 2015 in Water Conservation

Much of western US facing severe water shortage 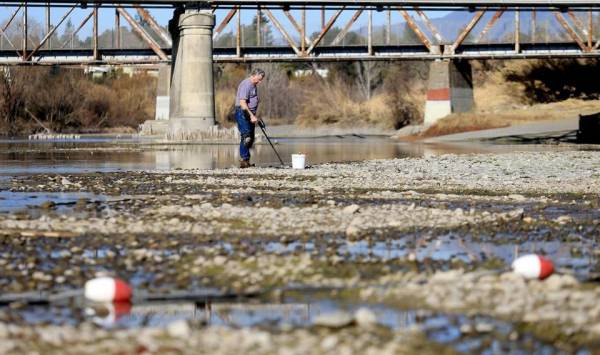 Hugh Beggs of Santa Rosa, Calif., searched for coins in the middle of the Russian River in Healdsburg, taking advantage of the below-normal water flow.

LOS ANGELES — The punishing drought that has swept California and much of the West is confronting authorities with the worst water shortage this region has faced in more than a century, with near-empty reservoirs, parched fields, starving livestock, clouds of smog and outbreaks of wildfires.

With no sign of significant rain, 17 rural communities in the state, which provide water to 40,000 people, are in danger of running out of water within 60 to 120 days.

California authorities announced Friday that they had no water left in the State Water Project, the main municipal water distribution system, to supplement the dwindling supplies of local agencies that serve 25 million people. It is the first time the project has turned off its spigot in its 54-year history.

“We are on track for having the worst drought in 500 years,” said B. Lynn Ingram, a professor of earth and planetary sciences at the University of California, Berkeley.

State officials said that in the worst scenario, they would truck drinking water into parched communities and drill additional wells to draw on groundwater. The deteriorating situation is likely to mean the imposition of mandatory water conservation measures for homeowners and businesses, who have already been asked to voluntarily reduce their water use by 20 percent.

Already the drought, technically in its third year, is forcing big shifts in behavior. Farmers in rural Nevada said they had even given up on planting, while ranchers in Northern California and New Mexico said they were being forced to sell off cattle as fields that should be 4 feet high in grass are blankets of brown and stunted stalks.

The authorities have outlawed fishing and camping in much of California to protect endangered salmon and guard against fires. Many people here said they had begun to cut back drastically on taking showers, washing their cars and watering their lawns.

Rain and snow showers brought relief in parts of the state at the week’s end — people emerging from a movie theater in West Hollywood on Thursday evening broke into applause upon seeing water splattering on the sidewalk — but nowhere near enough fell to make up for record-long stretches without precipitation, officials said.

“I have experienced a really long career in this area, and my worry meter has never been this high,” said Tim Quinn, executive director of the Association of California Water Agencies, a statewide coalition. “We are talking historical drought conditions, no supplies of water in many parts of the state. My industry’s job is to try to make sure that these kind of things never happen. And they are happening.”

Officials are girding for the kind of geographical, cultural and economic battles that have long plagued a part of the country that is defined by a lack of water: between farmers and environmentalists, urban and rural users and the northern and southern regions of this state.

“We do have a politics of finger-pointing and blame whenever there is a problem,” said Gov. Jerry Brown, a Democrat, who was the governor during the last major drought here, in 1976 and 1977. “And we have a problem, so there is going to be a tendency to blame people.”

Tom Vilsack, U.S. agriculture secretary, said in an interview that his agency’s ability to help farmers absorb the shock, with subsidies to buy food for cattle, had been undercut by the long deadlock in Congress over extending the farm bill, which finally seemed to be resolved last week.

Vilsack called the drought in California a “deep concern,” and a warning sign of trouble ahead for much of the West.

The crisis is unfolding in ways expected and unexpected. Near Sacramento, the low level of streams has brought out prospectors, sifting for flecks of gold in slow-running waters. To the west, the heavy water demand of growers of medical marijuana — 6 gallons per plant per day — is drawing down streams where salmon and other endangered fish species spawn.

“Every pickup truck has a water tank in the back,” said Scott Bauer, a coho salmon recovery coordinator with the California Department of Fish and Wildlife. “There is a potential to lose whole runs of fish.”

Without rain to scrub the air, pollution in the Los Angeles basin, which has declined during the past decade, has returned to dangerous levels, as evident from the brown-tinged air. Homeowners have been instructed to stop burning wood in their fireplaces.

In the San Joaquin Valley, federal limits for particulate matter were breached for most of December and January. Schools used a warning-flag system to signal when children should play indoors.

“One of the concerns is that as concentrations get higher, it affects not only the people who are most susceptible, but healthy people as well,” said Karen Magliano, assistant chief of the air quality planning division of the state’s Air Resources Board.

The impact has been particularly severe on farmers and ranchers.

“I have friends with the ground torn out, all ready to go,” said Darrell Pursel, who farms just south of Yerington, Nev. “But what are you going to plant? At this moment, it looks like we’re not going to have any water. Unless we get a lot of rain, I know I won’t be planting anything.”

Larry Reagan, a cattle rancher in eastern New Mexico said he had begun selling his herd of 250 cows last year and now faced the possibility of selling them all.

“There’s not much I can do, just feed them as much as I can and pray for rain,” Reagan said.

The University of California Cooperative Extension held a drought survival session last week in Browns Valley, about 60 miles north of Sacramento, drawing hundreds of ranchers in person and online. “We have people coming from six or seven hours away,” said Jeffrey James, who ran the session.

Dan Macon, 46, a rancher in Auburn, Calif., said the situation was “as bad as I have ever experienced. Most of our range lands are essentially out of feed.”

With each arrival of another parched sunrise, a sense of alarm is rising amid signs that this is a drought that only comes along every few centuries. Sacramento had gone 52 days without water, and Albuquerque had gone 42 days without rain or snow as of Saturday.

The snowpack in the Sierra Nevada, which supplies much of California with water during the dry season, was just 12 percent of normal last week, reflecting the lack of rain or snow in December and January.

“When we don’t have rainfall in our biggest two months, you really are starting off bad,” said Dar Mims, a meteorologist with the Air Resources Board.

Jacob Battersby, a producer who lives in Oakland, said he had begun cutting back even before the voluntary restrictions were announced.

“My wife and I both enjoy gardening,” he wrote in an email. “‘Sorry, plants. You will be getting none to drink this winter.’ They are at this point all shriveled up and dead.”