Posted by bchristo on Wednesday, 09 December 2015 in Water Conservation

Toilet-to-Tap is the Future of Water 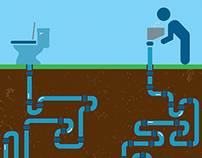 The rainfall and snowpack so far this autumn have been encouraging, but the stubborn reality is that California is still mired in drought. While farmers from Bakersfield to Fresno to Redding are screaming about water quotas, California residents say they are doing what they can, from pulling out grass lawns to capturing what little rainwater exists. We hear constant harping on the fact that 70 to 80 percent of California’s water goes to agriculture, which comprises only 2 percent of the state’s economy. But the focus on statistics overlooks the fact that the agriculture sector is growing — and no one wants to see the Sacramento Valley, Imperial Valley or San Joaquin Valley turn into wasteland.

Meanwhile, municipalities are trying to sort out how they can keep their citizens hydrated and their businesses running in an era of declining rainfall and depleted aquifers.Desalination is on its way in San Diego, where 7 to 10 percent of the region’s water will come from a plant in Carlsbad. While the technology is improving and costs are falling, the process is still expensive. Importing water from other states is not an option, as California’s neighbors already feel as if the Golden State’s 39 million residents are consuming more than their fair share. Massive snowfalls on the Atlantic coast have sparked some ideas of an East-West water pipeline, but the odds of that occurring are about as good as the Keystone XL pipeline project winning the green light.

Therefore, the future of water in California, the United States and really the world could be in water recycling. Yes, as in all that shower, sink and toilet water. Never mind the “gross” factor. Since 2008, Orange County, California, has been turning toilet water into tap, and is paving the way for other municipalities to get past the “yuck.”

The magic of recycled water in Orange County is a three-step process. First, all that wastewater at the Orange County Water District’s water recycling plant in Fountain Valley is micro-filtered. That water is then pressed through reverse-osmosis membranes, many of which are provided by Dow Chemical, long a leader in “RO” technology. Finally, that water is treated with ultraviolet light before it is discharged into the OC’s aquifers.

With its recent expansion, the Fountain Valley facility can process 100 million gallons (soon to be 130 million gallons) daily, enough to meet the needs of 850,000 people, or 27 percent of the county’s residents. The OC’s water district meets several goals: waste diversion from effluent pouring out into the Pacific Ocean, avoiding the risk of losing its aquifers forever, and a cost-effective way to produce water that has been recognized worldwide, is cheaper and more energy efficient than desalination, and exceeds federal safety standards.

The recycling of water is already commonplace, from the Middle East to Australia to other municipalities across North America. But the difference in Orange County is that it used for drinking water, while other cities, including Los Angeles, only use it for non-potable functions such as landscape irrigation. San Diego has a water expansion programunderway, set to generate drinking water in the coming decade. Silicon Valley is also joining the toilet-to-tap club.

The reality we must face is that most water we use, whether coming from our faucets or in a bottle from Whole Foods, has been recycled an endless number of times.