Posted by Christen7000 on Wednesday, 27 January 2016 in Earth Violators 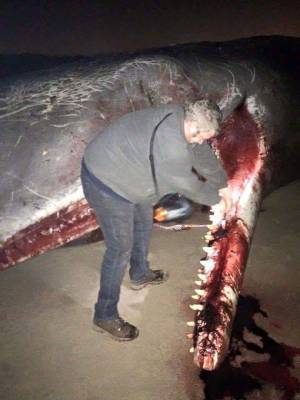 A group of beached whales have, naturally, attracted much attention in Skegness, England — after all, it's not every day people get to see a massive deep sea mammal up close. The images are surreal.

However, the latest developments in the ongoing story of the five dead sperm whales who washed ashore on England's beaches have caused quite the outcry on social media.

A photo of a man in Skegness allegedly taking teeth from one of the deceased whales was just the tip of the iceberg.

In response to the controversial photo, local officials have warned future onlookers against taking "trophies" from the beached whales, which is an illegal act, ITV reported. The man shown in the photo above was contacted by the police and claims he did not take anything from the whale.

In addition to the alleged looting, people are also taking photos with the dead whales and tagging their bodies with graffiti.

These beachings are the "worst sperm whale stranding off the English coast since records began in 1913," according to the Guardian. The first whale appeared on a beach in Hunstanton on Friday. Three other whales followed shortly after on Sunday, appearing on a beach in Skegness. The fifth whale beached himself in Wainfleet on Monday, Sky News reported. They're all believed to be members of the same pod.

Some scientists believe the whales may have became disoriented when they approached shallow waters in their hunt for food, the Guardian reported. Sperm whales are typically deep sea creatures and are listed as vulnerable byInternational Union for the Conservation of Nature and Natural Resources(IUCN).

This isn't the first time whales have beached themselves, and it probably won't be the last.

It's a global phenomenon that keeps on happening — whales have also recently washed ashore on beaches in Germany and the Netherlands. "The cause of mass strandings in pilot whales remains one of the great mysteries in the social behavior of whales and dolphins," C. Scott Baker, associate director of the Marine Mammal Institute at Oregon State University, told The Dodo in a previous storyabout a recent, massive beaching of whales in India.

"Although strandings of some species, such as beaked whales, are now known to be the result of human disturbance, such as navy sonar or seismic surveys, the mass strandings of pilot whales seems to be a natural phenomenon that results from their strong social bonds," he added.

That means, he said, that the whales may be intentionally beaching themselves: "The close social bonds presumably result in a kind of 'herd panic' or 'herd cohesion,' bringing the entire social group (the pod) into the shallow waters and at risk of stranding." Climate change, which can affect the locations of whale food sources, may also cause whales to travel farther than is typical and, therefore, into more shallow waters.

Graffiti on the whales, however, seems to blame humans for the beachings.

Regardless of the cause, the treatment of their dead bodies by visitors have been nothing short of disturbing for people worldwide.

The bodies of the whales currently remain on the beach, but the area has been taped off to keep people from getting too close. The whales will be permanently removed by Thursday, ITV reported.

If you'd like to help in protecting and preserving whale populations, check out the American Cetacean Society, a group dedicated to marine education and conservation.