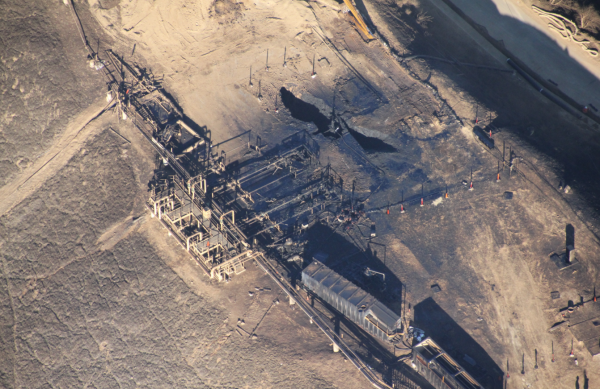 PORTER RANCH, CALIF. -- Kavita Ramchandani loved everything about evenings in her backyard: how the full moon lit up the sky, the way the breeze seemed to talk to her, the smell of the pine trees. She bought the single-story hillside house in this upscale Los Angeles County suburb after emigrating from India, and from the first night it felt like home.

Then last fall, gas started leaking from a well at a nearby storage facility, and Ramchandani, 53, began wheezing, getting nose bleeds and persistent headaches. She left her home in January.

Now, she says, the house just feels foreign. And scary.

He started feeling horrible too – with nausea and body aches. "It felt like someone was hammering my head," Khanlian says.

The Southern California Gas Company announced Feb. 18 that after nearly four months, it had permanently sealed the leaking well, and residents who had evacuated their homes could safely return.

The gas company, which had been picking up the tab for evacuees staying in hotels and motels, said it would pay for one additional week. But a Superior Court judge ordered the gas company on March 2 to continue paying for the temporary accommodations until March 18, allowing time for more air testing. The company said it has paid about $36 million in relocation expenses for about 3,400 households.

Ramchandani says she can't afford to pay for the hotel once the gas company stops footing the bill, but she fears returning to Porter Ranch. "I'm worried about my health," she says. "What if the breathlessness continues? What will I do then?"

The massive and unprecedented leak at the Aliso Canyon storage facility prompted Gov. Jerry Brown to declare a state of emergency in early January. Criminal charges and civil lawsuits against the gas company followed. Community leaders and politicians demanded more regulation of the aging facilities.

Legislators in Sacramento have jumped into the fray, proposing a bill to require more testing before the company can restart operations.

The leak has fueled concerns about the long-term health of residents exposed to methane, benzene and other chemicals. As part of his emergency declaration, Brown pledged to convene an independent panel of medical and scientific experts to review potential health risks.

Some residents have reported symptoms such as coughing, dizziness, stomachaches and nausea, according to the Los Angeles County Public Health Department. Department officials have said the symptoms should stop now that the well has been sealed.

But Ramchandani and others are worried that their health problems will continue – or worsen – when they go home. They fear what could happen in the future because of their recent exposure to the gas and chemicals.

Health officials maintain that the risk of long-term health problems is small. They say the main component in the emissions from the facility was methane, an odorless gas that doesn't generally cause health problems when inhaled. The storage facility also released mercaptans, pungent smelling gases that are added to make a leak easy to detect.

The leaking gas also contained benzene – a carcinogen – and other related chemicals. But health officials said benzene levels during the leak were no greater in Porter Ranch than in other areas of Los Angeles County.

"We already have bad air in Los Angeles," says Cyrus Rangan, who directs the toxicology and environmental assessment bureau for the L.A. County Department of Public Health. "You'd never say our air is the best in the world overall. But at least we can say we are not looking at levels that are far and above what you would normally breathe here."

The state's Office of Environmental Health Hazard Assessment also evaluated air samples collected by the gas company between November and January and determined that none of the potentially harmful compounds in the leaked emissions were at high enough concentrations to pose serious health problems. Any increase in cancer risk to people in Porter Ranch is therefore very small, the office concluded.