Why Hope Remains for Saving the World's Largest Gorillas 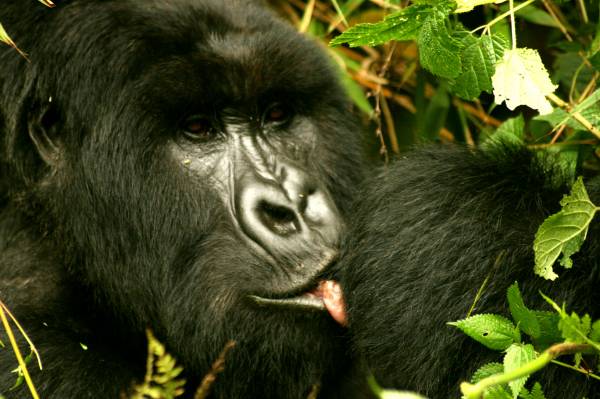 Andrew Plumptre is a senior conservationist in the Uganda Program at the Wildlife Conservation Society (WCS). Stuart Nixon is a conservationist at Chester Zoo in the U.K. who was working with Fauna & Flora International at the time these surveys were made. Radar Nishuli is chief park warden for the Kahuzi-Biega National Park in the Democratic Republic of Congo working for the Institut Congolais pour la Conservation de la Nature (ICCN). The authors contributed this article to Live Science's Expert Voices: Op-Ed & Insights.

The Rwandan genocide in 1994 forced hundreds of thousands of refugees to flee to the Democratic Republic of Congo (DRC), which two years later became embroiled in a calamitous civil war — an estimated five million lives were lost there over the following seven years. Alongside the human tragedy, the war has taken its toll on DRC's wildlife, as lawlessness, a heightened illegal bushmeat trade and increased deforestation took hold.

In 2011, the three institutions we worked for began a study to find out how those tragedies impacted the world's largest primate, the Grauer's gorilla. What we learned was shocking — a combination of illegal hunting, civil unrest and habitat loss from mining has led to a catastrophic collapse. Our research documents a devastating — nearly 80 percent — drop in the population of this gorilla subspecies, one of only four, from an estimated 17,000 individuals in 1995 to just 3,800 today.

Grauer's gorillas can weigh more than 400 pounds and are closely related to the better known mountain gorilla. Unlike mountain gorillas, which occupy the volcanic landscape at the intersection of the DRC, Uganda and Rwanda, this subspecies is restricted to the remote and politically troubled forests in the DRC's eastern regions.

Our findings justify re-categorizing the Grauer's gorilla as "critically endangered" on the IUCN list of Threatened Species, highlighting the perilous position these great apes are in and the need to act now to prevent a further decline in numbers. The Grauer's would be the final gorilla subspecies to enter this category — the other three are already critically endangered.

Our research results are significant not only for the light they shine on the crisis facing gorillas, but for the difficulty in collecting reliable data

amid ongoing instability and armed conflict. Armed militias are present all across the Grauer's gorilla range, so in addition to making observations in accessible, safer, areas, we rigorously assessed information collected by local community members and rangers.

The WCS and the Congolese Institute for Nature Conservation (ICCN, DRC's national park service) have been supporting a system

of data collection by park rangers and local community members that is entered in software called the Spatial Monitoring and Reporting Tool (SMART). The SMART system enables conservationists to monitor human activity and sightings of key species, including gorillas. These data have been collected across the gorillas' range in parks, reserves and proposed community managed areas.

The gorilla habitat in your mobile phone

One reason Grauer's gorilla numbers have declined so dramatically is an explosion in mining for columbo-tantalite, or coltan, and other minerals in the gorilla's range. The tantalum extracted from coltan ore is used for the capacitors in mobile phones, laptop computers, gaming consoles

, digital cameras — a wide range of popular products across the globe.

Most of the mining is conducted at remote sites often controlled by armed militias, which means miners turn to local wildlife for food. Although protected by law, gorillas are highly prized as bushmeat due to their large size and because they are easily tracked and killed as they move in groups on the ground in their small home ranges.

A future for Grauer's gorilla

To bring back the Congo's devastated wildlife, including the Grauer's gorilla, mining must be controlled and the various armed groups that control mines disarmed. To accomplish that, mining must end in protected areas where it is illegal under national law.

Four areas are now particularly crucial for the gorilla's survival: Kahuzi-Biega National Park; the adjacent Punia Gorilla Reserve in the west, where the WCS is supporting gorilla conservation; the Itombwe massif south of Kahuzi; and the remote, unprotected Usala Forest together with the Tayna Reserve to the north of Kahuzi, which because of poorsecurity

currently has no support.

The Itombwe and Punia reserves together would protect about 60 percent of the remaining gorilla habitat outside protected areas. These reserves have community support, but have not yet been legally formalized.

The WCS, WWF and AfriCapaciti, an African investment group with an emphasis on economic development and local empowerment, have been working in Itombwe with the local communities to map the boundaries of a proposed reserve in a participative approach. The boundaries have been approved by a provincial committee in South Kivu and all that remains is the legal signing of the "arrete" (a binding decree or judicial order) by the provincial governor of South Kivu. The WCS is starting a similar process with communities in the region for the Punia Gorilla Reserve. With community support for the conservation of the gorillas it will be easier to control the mining in these areas.