Posted by Wolf on Friday, 15 June 2012 in Lakes/Rivers/Wetlands 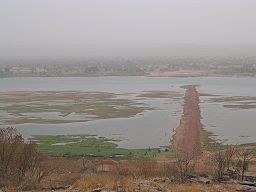 Severely affected by recent turmoil across its northern frontiers, Nigerien tourism pins hope on river valley attractions to play a major role in rebuilding its tourism industry in the upcoming years. Even though the river itself is threatened. Located in the heart of the Sahel Region, the vast desert lands of Niger have captivated European tourists seeking a taste of its immensely varied natural landscapes.

Once a hot spot for nature lovers and thrill seekers, the Sahara Desert turned up on many bucket lists. Here one can see and explore a great variety of attractions from sand boarding, camel-riding over the dunes to trekking including romantic cruises under the desert skies. Today, everything has stopped. The recent security situations in the northern part of Niger and its ongoing environmental calamities have drastically reduced the number of travelers, now more reluctant to undertake the unpredictable journey through the Sahara Desert. With the north off-limits, most of the country's tourism activities are now concentrated in the southern region around the capital Niamey. As the principal touristic attraction after the Sahara Desert, the Niger River has been an integral element for the advancement of tourism in the Sahel Region. Home to 1.5 million fishermen, cattle grazers and farmers, the river provides drinking water for livestock and people living along the valley. Niger’s economy is centered on riverside farming and animal husbandry activities irrigated by the Niger River, its essential life source. To revive of its struggling tourism industry, the Ministry of Tourism established touristic attractions inside the river valley, such as the newly renovated Gardens of Rio Bravo. However, the Niger River is also facing risks of extinction. Situated 15 km northwest of Niamey, the Gardens of Rio Bravo is the capital’s most fascinating excursion and the most hit by a current dry spell. When you first enter the tourist site, isolated plateaus and mountains rise above several thorn trees and dried up branches encroached onto grassland plains—a typical landscape of any dust-choked region such as this one. The small silhouette of a fishermen village stands behind the mountains, with their "pirogues" or outrigger canoes parked alongside the water. And, in the middle, lies the Niger River, an image that never fails to astonish. A single road takes you down the camping site. There you’ll find an open area dominated by barbecues grills, medium-sized traditional tents and the occasional tourist. Rio Bravo has become a synonym for splendor and tranquility. Visitors are charmed by its rich natural value and quiet atmosphere. People come to Rio Bravo for the adventure, the rustic lifestyle and to appreciate the cool air far off the congested heat of urban areas. An incredible site with great touristic potential, Rio Bravo offers unmatched opportunities to dazzle your senses and collect everlasting memories. Just take a boat trip down this great river under a colorful sunset and discover why this place has mesmerized tourists for decades. But all this could soon be history.

Due to irregular rain falls in the region, the Niger River is turning shallower more rapidly than anticipated. As it slowly dries up, vast sand islands accumulated overtime from nearby hill slopes emerge from the water, making it unsuitable for navigation. As the closest major source of potable water to the Sahara Desert, the Niger water is a key source of survival for ecosystems, life and the socio-economic development of an area severely stricken by drought and famine. But by 2040, only heavy silt, sand and vegetation will replace the livelihood of 110 million people living in the West of Africa. There is an urgent need for decision makers both local and international, to take action and reduce the spread of soil erosion, the silting of water courses and the intense desertification in the Sahel region which imperil the river and the people who depend on it. The whole Sahel region suffers from this widespread environmental degradation. However, the part of the river located in Niger is the one where land degradation proportions are the strongest. For the past fifty years, natural vegetation has almost completely disappeared, severely affecting land productivity and food production including fishing, fluvial transportation and most importantly the overall management of water. The Niger River is an alarming illustration of the deteriorating state of our ecosystems, worsened by a growing population and changes in climate. One thing for sure is without a strong pledge to save the Niger River by riverside populations and governments residing along its banks, the future of this once-majestic river isn’t looking so bright. A sprouting plant bakes under the desert sun anchored by dried-up cracking bars of mud and silt deposited over time by Niger River currents. Photo by: Linda Leila Diatta. Delimited by dense vegetation and a vivid green tree-lined riverfront, the livelihood of this remote fishermen village strongly depends on the Niger River—the only permanent water source and fertile area in the country. Photo by: Linda Leila Diatta. A young fisherman quietly waits on his pirogue, parked around shallow water prairies, as it floats near the edges of a sand island. Photo by: Linda Leila Diatta. An enthusiastic tourist takes his first walk on a sand island. Photo by: Linda Leila Diatta. The Niger River—also known as the pulse of West Africa, sparkles under the bright afternoon sun of the Rio Grande camping site. Photo by: Linda Leila Diatta. Capturing the last light of an incredibly colored mauve sunset over the Rio Grande gulf in Southern Niger. Photo by: Linda Leila Diatta.