Posted by GreenDog on Wednesday, 08 June 2016 in Ocean/Seas/Coastlines

It's World Ocean Day, For the Sake of our Planet Do Something 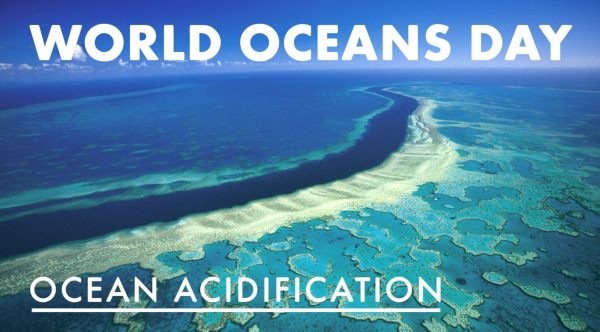 There are obvious reasons to care about the Earth's environment - global warming, and the litter and rubbish we can actually see are physically apparent to us.

However, the damage to our oceans is somewhat less obvious - because most of the environmental issues the seas face are submerged in the deep.

As it's World Ocean Day, here are some reasons to be more environmentally conscious, for the sake of our planet.

1. The Great Barrier Reef is being destroyed by global warming

Scientists said they had 'never seen anything like this before' when they examined the world's biggest coral reef. If viewing it is on your bucket list, you need to get Down Under quickly, according to their analysis.

The team released  maps which show damage to 93 per cent of the famous 1,500-mile stretch of reefs following a recent underwater heatwave.

Warning that the reef is now in a “precarious position”, scientists released aerial survey maps which show that the mass bleaching event is the worst in history and far more severe than previous such events in 1998 and 2002.

“We’ve never seen anything like this scale of bleaching before,” said Professor Terry Hughes, who convened a team of 300 scientists to study the bleaching.

The bleaching could raise fresh questions about the world heritage listing of the reef, which is often considered one of the seven wonders of the natural world.

Professor Hughes said he believed the Great Barrier Reef will still exist in 30 years but “it will be an altered reef”. “It is a precarious position to be in,” he said. “The northern part of the reef won’t look like it did a month ago for many years – and that is assuming we don’t have another bleaching event.” He added: “Every El Nino event has the capacity now to be a major bleaching event – unless we are lucky enough to get local bad weather such as a cyclone.”

2. There may be more plastic than fish in our waters by 2050

A report has warned that our seas are being used as the world's rubbish bin - and there may be more plastic than fish in the ocean by 2050.

At least 8 million tonnes of plastic already ends up in the ocean every year - the equivalent of a rubbish truck of waste every minute, according to the report from the World Economic Forum. The rate of plastic pollution is only expected to increase as more and more plastic is used globally, especially in emerging economies with weaker waste and recycling regimes.

3. Fish prefer to eat our discarded microplastics over food - and it's poisoning them

Scientists have warned that fish are becoming smaller because they are ingesting the plastic we toss into the sea. A study of European perch larvae found for the first time that exposure to high concentrations of microplastics stunts growth and alters their feeding habits, leading them to only eat plastic and ignore their natural food source of free swimming zooplankton.

Experiments found the microplastic particles caused 15 percent fewer hatchings. In addition to this, the fish which did hatch were found to be smaller than the fish who had not ingested microplastics.

4. Each foot of coastline contains five bags of plastics, according to scientists

Each foot of coastline in countries including Britain contains on average the equivalent of five shopping bags full of plastic.

Discarded bottles, food wrappers, toys and gadgets and increasingly ending up on shorelines, estuaries or uncontrolled landfill, from where they way to the oceans, scientists have warned.

For the first time the University of Georgia has quantified the scale of the problem.

Experts found that in 2010 around eight million metric tons of plastic entered seas and oceans as a direct result of people living within 30 miles of coastlines.

5. Global marine populations have been slashed in half since 1970

There are half as many fish and other sea creatures in the ocean since 1970, according to a study.

Fish critical to human food are suffering some of the greatest declines, the WWF warned.

In the report, the conservation group cautioned that over-fishing, pollution and climate change had significantly shrunk the size of commercial fish stocks between 1970 and 2010.

One family of fish that includes tuna and mackerel had declined 74 percent during the 40-year period, it found.

6. Oceans are the world's 'seventh largest economy', worth trillions

If you don't care about the creatures of the sea for the beauty and biological variety they provide, there is a financial incentive to save the oceans. The world's oceans have an estimated monetary value of $24 trillion (£15.6 trillion), according to a report, but over-fishing, pollution and climate change are rapidly eroding its resources.

The report, commissioned by WWF, said oceans generate goods and services worth at least $2.5 trillion each year, while their overall value is ten times that figure. If oceans were a nation, they would constitute the world's seventh largest economy, ranking just after Britain but ahead of the likes of Brazil, Russiaand India, WWF said. Their economic value is created from fisheries, tourism, shipping lanes and coastal protection afforded by corals and mangroves.

7. There's so much plastic in the sea, it's created its own ecosystem

Plastics break down to tiny polymers in the seas and are carried by currents and concentrated in certain areas. Scientists have discovered a diverse range of microbes thriving on the plastic flecks and say it represents a 'novel ecological habitat' in the oceans. Scientists found at least 1,000 different types of bacterial cells on the plastic samples, including many individual species yet to be identified. These included plants, algae, and bacteria that manufacture their own food (autotrophs), animals and bacteria that feed on them (heterotrophs), predators that feed on these, and other organisms that establish synergistic relationships (symbionts).

8. Pollution is turning our oceans acidic, and harming the fish

Marine biologists studying the impact of ocean acidification, which occurs when carbon dioxide dissolves in seawater, found it affects the ability of fish to smell. They discovered that young fish reared in water with elevated levels of carbon dioxide in the water become unable to distinguish the scent of predators and even seem attracted to their smell. More of the fish larvae also die in the wild, sparking fears that fish populations could struggle to survive and replenish themselves as oceans become more acidic. Our wasteful use of fossil fuels is causing more carbon dioxide to dissolve in the ocean - and potentially killing the fish.

9. Scientists have warned the oceans are moving into an 'extinction phase'

In 2011, scientists warned future generations may not be able to enjoy the wonders of the oceans. The scientists, gathered for a workshop at Oxford University, warned that entire ecosystems, such as coral reefs, could be lost in a generation. Already fish stocks are collapsing, leading to a risk of rising food prices and even starvation in some parts of the world. The experts blamed the increased amount of carbon dioxide in the atmosphere for pushing up ocean temperatures, boosting algae so there is less oxygen and increasing acidity of the water. The conditions are similar to every previous mass extinction event in the Earth's history.

Noise from ships interferes with the ability of endangered killer whales to 'talk' to each other and hunt, a study suggested. Researchers found underwater sound pollution in coastal habitats disrupts the orca's communication methods and ability to locate scarce salmon. Scientists set out to discover if noise from a nearby shipping lane interferes with the orca's ability to send out clicks and listen for their echoes in the ocean off Seattle while hunting salmon. The researchers measured underwater noise as ships passed their study site 3,000 times. Research has shown that the growth in commercial shipping has raised the intensity of low-frequency noise in the ocean almost 10-fold since the 1960s.

11. A post-mortem on thirteen dead sperm whales found their stomachs full of plastic

The heartbreaking effect of human waste was discovered when a post-mortem was conducted on 13 beached sperm whales. The plastic we discard into the ocean often makes its way into the mouths and stomachs of sea creatures. A post-mortem of the creatures, found ashore near the town of Toenning in Schleswig-Holstein, Germany, showed their stomachs were full of plastic. This plastic included a 13-metre-long (43-foot-long) fisherman’s net and a 70-centimetre (28-inch) piece of plastic from a car. A man posted a shocking image on Instagram of some of the plastic found in their stomachs. The sperm whales probably didn't die by being poisoned by plastic, however. Scientists thought it was likely they perished from heart failure due to starvation. “These findings show us the results of our plastic orientated society,” Schleswig-Holstein environment Minister Robert Habeck told the Daily Mail. “Animals inadvertently consume plastic and plastic waste which causes them to suffer and at worst, causes them to starve with full stomachs.”

Researchers studying a colony of penguin found that parents are forced to swim more than 25 miles further away from their nests in order to find food. Traditionally one parent incubates the eggs on the nest while the other makes the arduous two-week, 200-mile swim to find food. When the chicks are born the parents continue to make 100-mile journeys to feed them, and are away for days on end. But over the last decade scientists have discovered that the journey has become even tougher as the forager has to travel a further 25 miles away from the nest to find sufficient fish. The extra distance is endangering the very survival of colonies and also forcing them to move ever farther north to nest.