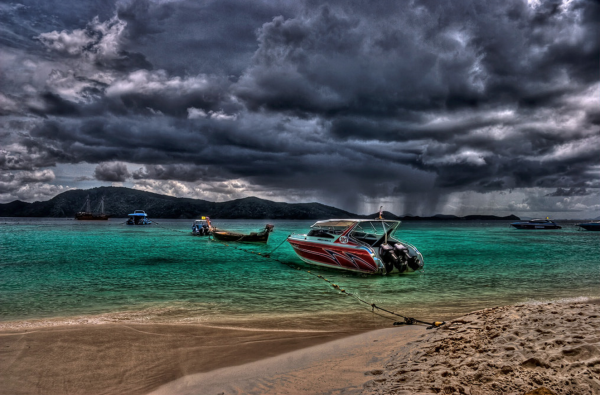 I saw this and the title alone was a shock to my senses. Why do we sit by while the coral reefs very possibly the "canary in the cola mine" for climate change a life on this planet die and its not big news. When will the truth be worth something again? Let's hope its not too late already.

PHUKET: Disturbing photographs showing continuing vandalism at one of Thailand's premier coral reefs are triggering calls for enforcement of laws to prevent an environmental disaster. The photographs, taken this week by Phuket marine biologist Nalinee Thongtham, show corals recently destroyed by dragging speedboat anchors; tourists lighting fires on rocks in a marine park; snorkellers feeding monkeys and fish and other breaches of laws.

In reaction, reforming activist Dr Thon Thamrongnawasawat has called for millions of baht stolen by swindlers from the Phi Phi national park coffers to be spent on saving the country's key coral reefs - before they disappear forever. The grassroots campaign using social media is the best chance yet for saving Thailand's precious coral reefs before it's too late. Dr Thon wrote yesterday that Phi Phi, Koh Tao and Koh Lipe were just three places where corals faced complete destruction. Dr Thon, who recently drew the attention of the military to years of pilfering that has resulted in the loss of billions of baht in marine park fees, added:''One day of marine park fees could pay for 50 staff working for a month. Three days would buy a dinghy. Ten days would buy a speedboat for patrols.''Levels of corruption at marine parks are considered among the worst in Thailand, with laws to protect the environment going unenforced, and cash going into pockets. ''What are we doing?'' Dr Thon asked. ''We have huge income. Where does all the money go?''The answer: not where it should go - protecting Thailand's natural wonderlands. ''We have a policy, we have laws, we have money. What are we waiting for?'' asked Dr Thon. Businesses now raking in cash from tourism from Phuket to Phi Phi and other marine parks will lose everything once the reefs are destroyed, Dr Thon said. ''Only 23 percent of Thailand's coral treasures still survive,'' he added. ''It's time for action.''He estimated that the coral would all be gone within 20 years at the present rate of destruction. ''Marine biologists are very worried,'' he said. ''We have laws, but they are never enforced. We talk about sustainability and green tourism, but it never happens.''Millions of baht has been collected by authorities ''but virtually none of it is being put back into enforcement.''The military acted soon after taking over in Thailand last year to save Phuket's beaches from private profit-takers. No action of consequence has been taken to save Thailand's other key Andaman tourist natural attractions, the coral reefs.