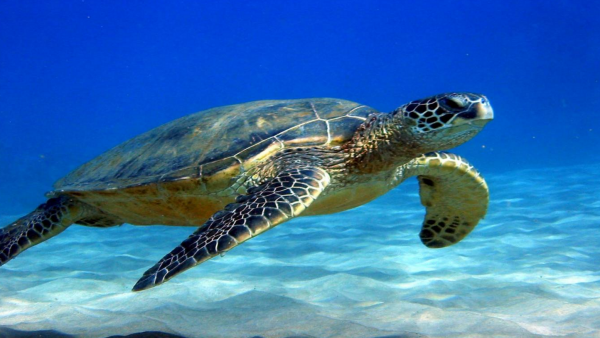 Calling all sea turtle lovers! In honor of World Sea Turtle Day on June 16, 2014, we're taking a special look at sea turtles species found in U.S. waters and the science we use to protect these magnificent marine creatures. Sea turtles are air-breathing reptiles with streamlined bodies and large flippers. These turtles inhabit tropical and subtropical ocean waters throughout the world. Although sea turtles live most of their lives in the ocean, adult females must return to beaches on land to lay their eggs. They often migrate long distances between feeding grounds and nesting beaches.

There are seven species of sea turtles, which are marine reptiles that need to breathe air to survive. Six of the seven species are found in US waters, and the flatback turtle is only found in the Western Indo-Pacific. Most of their lives are spent at sea, with some species diving to depths of 3000 feet (900 meters). They return to the shore to lay eggs, often making long journeys to go to specific beaches year after year.

Their wide-reaching movement and the small amount of time they spend on land means that it is hard to measure just how many sea turtles remain, or how many there used to be. (One estimate is that millions of green sea turtles were in the Caribbean at the time of Christopher Columbus.) Now all six of the species found in US waters are listed as endangered under the Endangered Species Act, and those six are also found on the IUCN Red List where their listings range from Vulnerable to Critically Endangered. They have many human-induced threats includingentanglement in fishing gear, marine debris, coastal habitat destruction, poaching of adults and eggs, and climate change.

There are sea turtle conservation successes, as well. Off the coast of Mexico, one community is hanging lights on their fishing nets so turtles can avoid them. They've found a 50 percent reduction in turtle catch at night, while the fish catch has actually gone up. Turtle Excluder Devices (TEDs)also help to prevent sea turtles from getting caught in shrimp trawling gear.