Posted by bjb41 on Tuesday, 05 July 2016 in Environmental Heroes 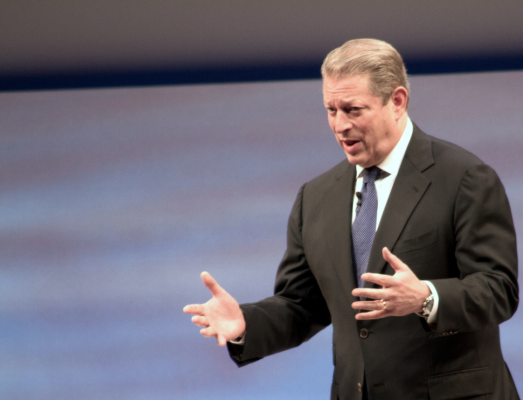 As a man on a "great social mission," former Vice President Al Gore says he feels like baseball trailblazer Jackie Robinson, the messenger of integration who was often ridiculed and worse when he hit the bases as the first black to play professional ball.

"There is a time-honored tradition of people who strongly disagree with a message and take it out on the messenger, and opponents of integration had a personal animus for Jackie Robinson. Opponents of all the great social movements would take out after the advocates that were most effective in asking people to change," Gore told his one-time employer, Nashville's Tennessean newspaper.

"As a result, I don't take it personally when the criticism comes at me. I believe so passionately in this mission, if you will. The word 'mission' might sound a little grandiose, but that's kind of what it feels like to me. Honestly, it is a joy and a privilege to have work that justifies pouring every ounce of energy you can pour into it. That is a blessing that is to be cherished," he added in an interview to discuss the 10th anniversary of his movie and book, "An Inconvenient Truth."

During the interview, former President Bill Clinton's veep blamed the spread of the Zika virus and floods in Texas, Nashville and Europe on climate change.

"We're still putting 110 million tons of global warming pollution into the atmosphere every day. And it's adding up. The cumulative amount of heat energy trapped by all the man-made pollution up there is now equal to 400,000 Hiroshima-class (atomic) bombs going off every day.

"That's disrupting weather patterns, putting a lot more water vapor into the air and causing record downpours — like the ones going on in Texas (recently) and in France and Germany and other places. And, simultaneously, it's causing these droughts because it's pulling the soil moisture out of the land, so with the ice melting and sea levels rising — as the scientists predicted — tropical diseases like Zika are coming into areas like the U.S."