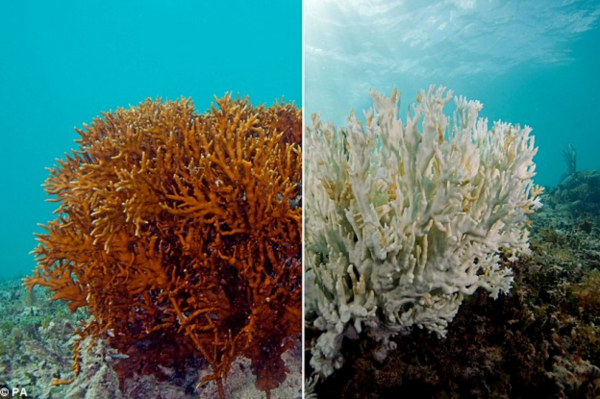 Tropical island nations should team up to ban coral-killing sunscreen products, following the example of Hawaii, a conference has heard.

Chemical compounds in sunscreen lotions cause irreparable damage to reefs, which are crucial to the livelihoods of 500 million people in the tropics, scientist and policymakers said at the IUCN World Conservation Congress on 3 September. Hawaii is leading a legistlative effort to ban the use of sunscreen that contains oxybenzone or similar harmful agents at its beaches.

“It is a no-brainer — a compound is hurting our reefs, so the simple thing is to ban it,” says Will Espero, the Hawaiian senator leading the legal challenge. “We are working on some draft legislation, it is almost done. Once we are there, let’s go international with it.”

The chemical agents in many sunscreen brands have long-term harmful effects on corals, damaging their fertility and ability to absorb sunlight. They also cause baby corals to become grossly deformed, so they cannot colonise new spaces.

“If you do not see young corals, three to five-year-old ones, then your reef is essentially dead,” explains Bob Richmond, a marine conservation researcher at the University of Hawaii Manoa.

“Furthermore, sunscreen pollution can travel from a single beach to a very far distance.”

Hawaii experienced its first major coral bleaching case in 2014, and has seen coral reef die-off every year since then. Severe bleaching cases have also been observed in the Easter islands, Fiji, Tonga and several Caribbean nations — all of which have economies highly dependent on tourism.

Richmond adds that corals are assailed by a variety of stresses, including global warming and ocean acidification. But sunscreen pollution is an issue that can easily be resolved, he told SciDev.Net, adding that sunscreen lotions containing physical agents, such as zinc or titanium oxide, are safe.