Posted by sbitkoff on Monday, 03 October 2016 in Oil Spill 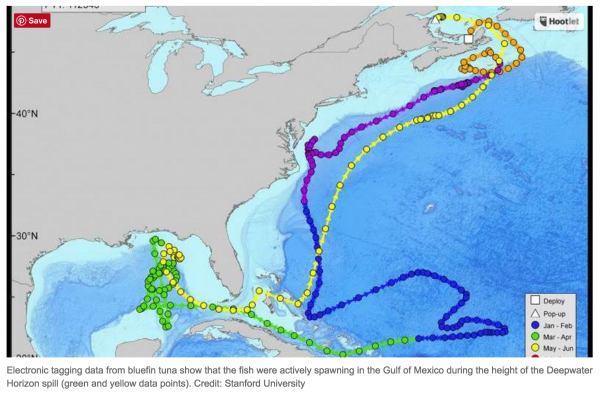 The Deepwater Horizon oil spill was one of the largest environmental disasters in history, releasing roughly 4 million barrels of crude oil into the Gulf of Mexico. For Atlantic bluefin tuna, it occurred at the worst time of year, during peak spawning season, when eggs and larval fish that are particularly vulnerable to environmental stressors exist in mass quantity.

In a study published in Scientific Reports, scientists from Stanford and NOAA provide the best yet analysis of how the 2010 breeding season might have been impacted by the oil spill.

Although the spill encompassed a relatively small proportion of the bluefin tuna spawning grounds, which extend throughout the northern Gulf of Mexico, the authors showed the cumulative oiled tuna habitat was roughly 3.1 million square miles, representing the potential for a significant impact on eggs and larval bluefin tuna in the Gulf of Mexico.

The authors concluded that the spill impacts combined with the multiple stressors of ocean warming and fishing pressure could make it more difficult for this unique population to rebuild.

"We know that bluefin tuna face numerous threats in the Gulf of Mexico and the oil spill represents another potential impact during a critical portion of their life history," said Elliott Hazen of NOAA Fisheries' Southwest Fisheries Science Center in La Jolla, California, and first author of the study

The scientists directly mapped the preferred spawning habitat of the Atlantic bluefin tuna by drawing from a 16-year data set of electronic tagging data from 66 fish, which provided information such as the animals' locations, temperatures and unique diving patterns after up to a year of being tracked on sojourns of thousands of miles. They then overlaid this data with satellite observations of the oil spill's reach, to map the potential impact.

"It took us many years to establish and perfect the techniques of putting a satellite tag, essentially a small computer, on giant bluefin tuna, many over 1,000 pounds in this study, and figure out exactly where and when they potentially spawn in the Gulf of Mexico," said study co-author Barbara A. Block, a professor of marine sciences at Stanford. Block led the effort to discern exactly where and when the bluefin spawn.

They found that the timing of the oil spill directly overlapped with the maximum extent of adult bluefin tuna foraging and spawning habitat in the Gulf of Mexico. At its peak in May 2010, the spill covered more than 5 percent of the spawning habitat of Atlantic bluefin tuna in the U.S. Exclusive Economic Zone.

Exposure to oil has previously been shown to have physiological consequences to the heart, and can cause deformations and death in eggs and larval fish, making it crucial to understand the effects in order to assess the impacts of oil spills. The effect of oil on spawning adult fish is not as well understood but the crude oil may add stressors to all life history stages occurring in the Gulf of Mexico.

"The bluefin tuna population in the Gulf of Mexico has been struggling to rebuild to healthy levels for over 30 years," Block said. "These fish are a genetically unique population, and thus stressors such as the Deepwater Horizon oil spill, even if minor, may have population-level effects. It is difficult to measure recruitment from the Gulf of Mexico post-2010, as the fish take a long time to enter into the commercial fishery where monitoring occurs, so we remain concerned."

The researchers said that their results are only inferring that the Deepwater Horizon spill likely harmed a sliver of the spawning habitats, and thus at least some of the 2010 class of bluefin tuna, but further monitoring is needed to understand how that affects the population at large.