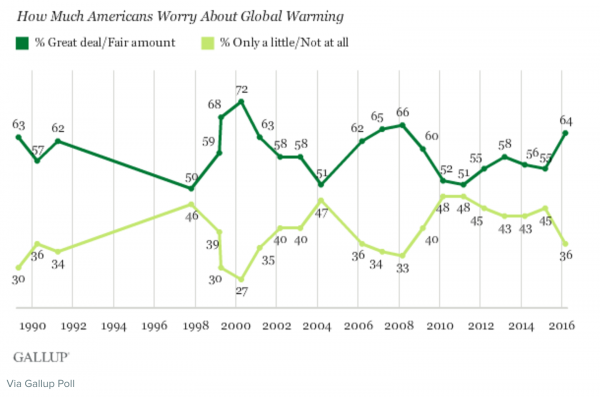 The American people just elected an outspoken climate-change denier as president. So does that mean the climate conversation is closed for the next four years? Of course not. President-elect Donald “I’m not a big believer in climate change” Trump wasn’t elected for his anti-climate action rhetoric. Rather, he was elected despite it.

Americans across the political spectrum say they are concerned about climate change and want a federal government to take action. A full 70 percent of the American public considers it a “high priority” for the government to take steps to cut greenhouse gas emissions, according to a recent survey from the Program for Public Consultation at the University of Maryland. And a March Gallup poll found that 64 percent of Americans worried either a “great deal” or a “fair amount” about global warming.

Those numbers are a lot higher than the popular vote supporting either candidate.

But in a presidential election, poll after poll revealed that climate change simply isn’t yet a top priority for voters. (Among the issues voters said would influence their vote for President in 2016, global warming ranked 19th in importance of the 23 issues asked about, according to a Yale and George Mason University study.)

“Most people, even people who are supporters of Trump, they do not have a view that this is not an issue, not a problem, and nothing should be done about it,” says Steven Kull, who led the Maryland research. “Most have the sense, ‘Well, maybe there’s some problem, maybe we should take some steps, it’s probably worth it, the cost is not that high.’”

Americans don’t talk about climate change. It simply doesn’t come up in normal conversation and it isn’t something people hear about in their everyday lives. A group of researchers at the Yale Program of Climate Change Communication have dubbed this the “spiral of silence”—a social psychological quirk “in which even people who care about the issue, shy away from discussing it because they so infrequently hear other people talking about it – reinforcing the spiral.”

Even people who have great concern about climate change tend to talk around the issue, perhaps focusing on renewable energy solutions or hinting ambiguously about weird weather. This is a problem, explains Cara Pike, Executive Director of Climate Access. “Conversations about climate change with friends and family just aren’t happening,” Pike told me, “and we need to make it okay to talk about, even if it’s just having a conversation with someone you care about, to say you’re concerned about it.” Why not take the more comfortable route and talk about all the jobs that solar and wind create and how cool Tesla is? “If we leave climate out of the conversation,” Pike explains, “people don’t understand the scale of the problem, or the scale of the solutions that are necessary.”

Out of all the post-election assessments and postmortems, one lesson is inarguable: that the political establishment and Washington elites are dangerously out of touch with the wants and needs of the American people. On the eve of the election, Trump advisor Sarah Huckabee Sanders put the choice to the American people in terms that sounded like typical campaign rhetoric, but seems now a defining message: “I think that the choice tomorrow could not be more clear...the corrupt status quo versus change.”

Trump voters, like many Bernie Sanders supporters in the primary, were casting a ballot for an end to the status quo.

Nothing in America is more “status quo” than the fossil fuel industry. Coal, oil, and gas have been a dominant force in our economy—and the political system—for close to a century. Much of Congress (which itself is polling at historic lows) is essentially a funded legislative arm of the fossil fuel industry. According to NoFossilFuelMoney.org, fossil fuel companies contributed $29.6 million to Congressional candidates in the 2016 election cycle, $29.1 million of which went to incumbents. “This data shows fossil fuel companies are investing heavily in the status quo,” said Brant Olson, director of ClimateTruth.org Action, which launched the database. “They are betting big on incumbents to maintain a Congress that’s friendly to dirty energy, and in the process, robbing the American people of clean energy jobs and a safe climate future.”