Posted by ep-admin on Thursday, 08 December 2011 in Buy Local

Buying Meat Directly From a Farmer: 7 Things You Need to Know 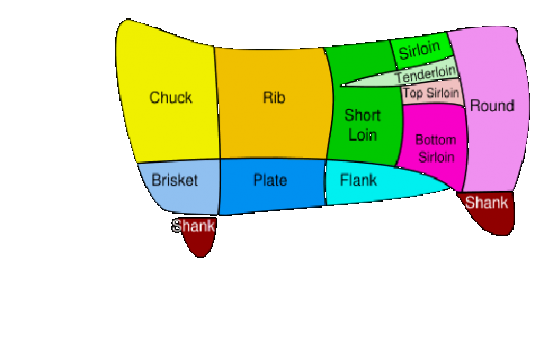 Like most things that I’ve done around here over the course of the past few years, I started buying meat directly from a local farmer in idealistic and almost utter ignorance.
I mean, it’s not exactly like I went out looking for someone to sell me half a hog.

As a matter of fact, when I first started looking into buying local food, meat wasn’t even on my radar screen. Like most people, when I thought of “local food” I thought of CSAs and farmer’s markets, which to my limited understanding meant produce, plain and simple. But when I started participating in a local area food group in Southern Maryland, there was much more than produce on the menu. There were eggs. There were broilers. And then one day there was this:

“For one more week, I am taking orders for meat from half or whole hogs for fall delivery.”

Hello! What’s this? Are you telling me that I can buy a hog?

Of course I had a ton of questions. Starting with, why on earth would I want to buy a hog?

Well, for me it was all about the quality of the meat.

It’s only recently that I’ve become aware of the shortcomings of even organic and “naturally-raised” grocery store eggs and meat, and it wasn’t until I read Michael Pollan’s The Omnivore’s Dilemma that the penny dropped. In Pollan’s tongue-twisting words – we are what what we eat eats. And just because our beef was raised “without the use of antibiotics or artificial growth hormones” or has been certified “organic” doesn’t mean that it wasn’t standing in a feedlot up to its ankles in its own manure, eating food that cows were never meant to eat and that makes them sick, which is why they get fed all those antibiotics in the first place.

It’s enough to make a person lose her appetite.

But as I said, all of this had not yet arrived in my sphere of notice when I decided to throw caution to the wind and order half a hog. The question I asked was “is it organic,” not “what is the farmer feeding it.” So with approximately 80 pounds of meat coming my way, I really lucked out to find a few months later that my Tamworth hog was being fattened on foraged acorns, an image that calls to mind the feral hog that Pollan shot for his “perfect meal.”

Here’s seven other things that I learned:

1. You’ll get your meat on Nature’s timeline. Not yours.

First off, when you order a whole or a half (or in the case of a cow, a quarter) of an animal, you are entering the Rubicon of fickle nature. Temporal exactitudes are impossible. The hog will be butchered when it reaches approximately 250 pounds; when that is depends on a number of factors, and in our case the biggest factor of all turned out to be the weather. The hogs had a large field to themselves and spent much of their time foraging for acorns underneath a small grove of trees, a task that was made much more difficult by our unusually wet fall. Week after week of rain and several feet of snow apparently made the acorns – and so the desired butchering weight – harder to come by. When I originally placed the order, delivery of the meat was scheduled for sometime in November. It was March before I actually brought anything home.

2. You and the farmer are not the only players.

Fact number two is that you and the farmer (and the hog) are not the only players involved here. In Maryland it’s illegal for the farmer to butcher the hog himself on his property, so they are taken somewhere else for slaughter. But not to the butcher. It turns out that the butcher, who keeps a shop five minutes up the road from me, doesn’t do the slaughtering. What he does is turn the freshly killed animal into various cuts of meat – the chops, the tenderloin, the ribs, etc. He can also smoke the bacon and make the sausage.

3. Some of your meat may require further processing.

We tend to think of “processing” as an ugly word, but the truth is that there are also ways to “process” food which are age-old and natural. For instance, the cut of meat that becomes a ham does not spring off the hog as a ham. It needs to be cured and smoked. The cut of meat that is sliced for bacon is not exactly bacon as we know it until it, too, is cured and smoked. The part of the hog that will become sausage requires grinding, seasoning, stuffing and/or shaping. Chops don’t come off the pig ready to grill. They need to be cut from the loin, and you’ll probably get to specify how thickly you want them cut, and how many of them you want packaged together. All of these things add to the timeline and affect when you will get your meat, and you have to understand what these processes are in order to have a conversation with the farmer and/or the butcher about them.

Which leads into the next thing you need to know.

4. The price of your meat per pound may not reflect the entire final cost.

Meat is usually sold at a certain price per pound. Ask questions to make sure that that price per pound is not just what the farmer is expecting for raising and selling the meat. The slaughtering, the butchering and the processing must also be paid for. Is this part of the farmer’s cost of doing business, figured into the price per pound, as it is when you buy meat packaged and ready to go at the grocery store? Or are you expected to pay these costs in addition to the price per pound that you’re paying the farmer? And who do you pay them to? And when? You need to ask these questions.

By which I mean to say that I was offered half the head. I graciously declined.

But I did receive two hocks and two hooves. What does a person do with a hog hoof? Apparently use it to flavor beans and soups. I haven’t tried this yet, but I’m sure that at some point I will, though seeing that hoof bobbing about in my cooking pot may make me feel like I’m in a cartoon…

6. Smoked/cured hams are “cooked” and ready to eat.

When I decided to prepare my “picnic” ham I’ll be honest with you, I had no idea what to do with it. So I threw it in the crock pot. I rubbed it with honey and molasses and Dijon mustard, covered it with water and cooked it until it fell apart like pulled pork. It was pretty doggone good. When I told the farmer this he looked at me in amazement. At first I thought he was impressed with my recipe. Then I realized that it wasn’t my recipe that had dazzled him, it was my stupidity. The picnic ham is already cooked, he told me. "You just have to soak it for two hours." Come to think of it, my pulled pork was quite – um – salty.

If the farmer gives you something that you don’t know how to prepare, don’t fake it. Ask him!

7. Buying meat directly from a farmer is totally and completely worth it.

I may not have gotten my meat when I expected to get it, and it may have ended up costing me a little more than I had thought, but my whole meat-buying experience has been completely satisfying and fantastic. I have great peace of mind about what we are eating. I have ordered a quarter cow for fall delivery, and whenever I head out to the farm to pick something up I can see these longhorn beauties grazing in the field. And I should add that every time I go out there they’re in a different field, so I know that the farmer is employing rotational grazing.

And my goodness, the chickens! The other day we ate a chicken that was fresh, and I mean slaughtered-the-same-day-we-ate-it fresh. It was amazing. These moist, meaty chickens have ruined me for store bought chickens.

Paradoxically, individual self-sufficiency inherently involves community. We’re participating in community when we buy food at our local chain grocery store too; we just don’t see that community, and we may not always share its values. Profit as a motivation is not always compatible with optimum human health. Buying a whole or a half animal directly from a farmer that shares your food values puts you in touch with your local community. It’s also a sound alternative to industrially produced food. You’ll know where your meat came from, how it was raised, who raised it, and what it ate. You can probably even visit the farm while it’s being raised and see all of these things for yourself. Also, there’s a real good chance that the particular kind of animal that you’re buying isn’t the only thing available to you from that farm. You may find that you can meet all of your meat and egg needs – and maybe even get some produce – from a single point of contact. For instance, the farm I go to raises hogs, goats, rabbits, ducks, geese, Guinea fowl, chickens (for meat and eggs) and turkeys, and beginning this spring, the longhorn cows.