Posted by ESKCSG on Sunday, 15 January 2017 in Climate Change 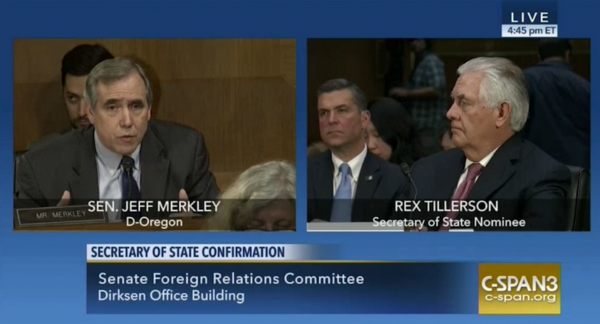 Late into Rex Tillerson’s marathon secretary of state confirmation hearing yesterday, it came time for Sen. Jeff Merkley’s second round of questioning. What followed was something rare in US politics: a substantive back and forth on the subject of climate change. It was a deft bit of work on Merkley’s part, as it drew Tillerson out. Underneath the polish, it turns out, he is a very familiar sort of climate skeptic. As I noted yesterday in a post, Tillerson is a “lukewarmist” on climate change. He acknowledges that carbon emissions are having a warming effect, but says we can’t predict what will happen, we can’t live without fossil fuels, and we can adapt to whatever climate change does occur. I don’t doubt that many lukewarmists sincerely believe all this, and maybe Tillerson does too. But regardless, it is an extremely convenient stance for someone in his position. And it is strategically savvy. It enables him (and ExxonMobil) to appear sober and sensible in contrast to science deniers like, uh, Tillerson’s boss, President-elect Donald Trump, who think it’s all a hoax. But it doesn’t commit them to any urgency or suggest any particular level of greenhouse gas reductions. Similarly, supporting a global, revenue-neutral carbon tax enables them to appear open-minded and solution-oriented without committing them to any policy that actually has a chance of passing. Lukewarmism has always been the smarter play for conservatives, but their zealotry carried them over into conspiracy theories. It’s making a comeback, though, especially among the think tank set. One key insight behind lukewarmism is that interest in climate change among US elected officials and national journalists is an inch-deep at best. Almost never will a US politician be pushed beyond bromides, usually about whether climate change is “real.” (Imagine: “Senator, what is your position on diabetes? Is it real?”) A lukewarmist has plenty of bromides: Climate change is a real risk; we should do something about it; research and innovation are great. That’s all it takes to be deemed sensible on climate policy. Rarely if ever will anyone probe beyond that. And Tillerson is smooth, too. It’s easy to see why he’s good in negotiations. He rarely says more than he has to and betrays little emotion. But Merkley actually pushed. He starts by trying to get Tillerson to plainly acknowledge that climate change is a serious risk. Tillerson doesn’t want to get caught sounding too unequivocal, so he grumbles about how “the models” don’t agree on what’s going to happen. In fact, “none of them agree.” And here we see Tillerson beginning to show his cards. That there is uncertainty in climate models, particularly when it comes to predicting specific regional impacts in specific future years, is undeniable. It’s practically a truism in the field. But by the same token, models do converge with high confidence on big-picture impacts at high temperatures. There is more than enough model agreement to alarm the hell out of scientists. Merkley then points out that noticeable impacts of climate change are already taking place in his state and many others, and that it’s only going to get worse. He notes that many people are coming to see global warming as a national security threat. Does Tillerson? “I don’t see it as the imminent security threat that perhaps others do,” Tillerson acknowledges. Those “others” include a wide swath of the national security community and the Department of Defense itself, which called climate change a “threat multiplier.” Merkley then points out that the drought in Syria is what helped cause the civil war and migrations that ended up producing so much political trouble across Europe. Has Tillerson considered climate’s role as a threat multiplier? Tillerson acknowledges that there are droughts and insect infestations, but says “the science behind the clear connection is not conclusive.” He says there are “many reports out there” that say we can’t connect individual weather and climactic events to global warming. This kind of hair-splitting about causality is an old chestnut in climate debates, but it too is rapidly being rendered anachronistic. The National Academies of Science recently issued a book-length report, authored by dozens of researchers, surveying the rapidly maturing field of attribution science. They emphasize that it’s important to frame the question correctly. No, background atmospheric conditions are never “the cause” of a weather event, much less a complex sociopolitical event like armed conflict. What changes in background atmospheric conditions do is raise the probability of more proximate threats. They make a whole range of dangers more likely. But properly understood, yes, it is increasingly possible to attribute individual weather events to changes brought about by global warming. We can say that it is very unlikely a particular event would have happened without warming, which amounts to the same thing. Merkley explains all this and asks whether Tillerson agrees that climate change raises the odds of extreme weather events. “Some literature suggests that,” Tillerson says. “There’s other literature that suggests it’s inconclusive.” Again, Tillerson is showing his cards. “Scientists disagree” is the oldest skeptic argument of all. The global warming signal amidst the weather noise is getting clearer and clearer, but the argument never changes. Merkley doesn’t soft-pedal it either. He says Tillerson’s position is “disappointing.” Article Continues; http://www.vox.com/policy-and-politics/2017/1/12/14248484/merkley-tillerson-climate-change-skeptic