Posted by Calle on Thursday, 02 February 2017 in Ocean/Seas/Coastlines 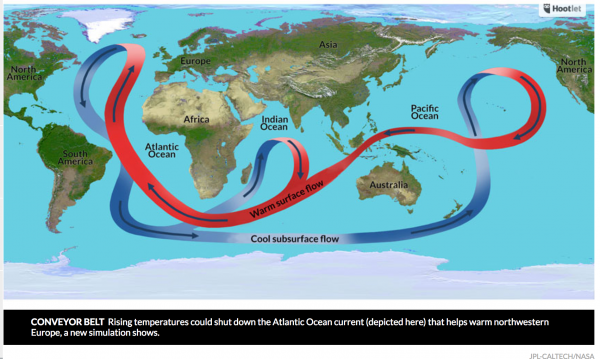 Spewing too much carbon dioxide into the atmosphere could shut down the major ocean current that ferries warm water to the North Atlantic, new climate simulations suggest. While not as extreme as the doomsday scenario portrayed in the movie The Day After Tomorrow, such a shutdown could cause wintertime temperatures to plummet by an estimated 7 degrees Celsius or more in northwestern Europe and shift rainfall patterns across the globe.

Many previous climate simulations predicted that the Atlantic circulation would remain largely stable under future climate change. But those simulations failed to accurately portray how relatively freshwater flows between the Atlantic and Southern oceans, an important mechanism as the climate warms. After fixing that inaccuracy, Yale University climate scientist Wei Liu and colleagues set up an extreme climate scenario to test the current’s robustness. Doubling CO2concentrations in the atmosphere shuttered the Atlantic current in 300 years, the researchers’ simulation showed.

While such a rapid CO2 rise is unrealistic, the new simulation demonstrates that the current isn’t stable after all, the researchers conclude January 4 in Science Advances. “The next step is to use a more realistic warming scenario to predict what the future will look like,” Liu says.

Even with a more realistic scenario, the applicability to the real world will be hampered by a lack of direct long-term observations of the Atlantic circulation, says Gerald Meehl, a climate scientist at the National Center for Atmospheric Research in Boulder, Colo. Observations help improve simulations, but such data for the Atlantic current don’t go back “for more than a decade or two,” he says.