Posted by plantitfilm on Friday, 10 March 2017 in MyBlog 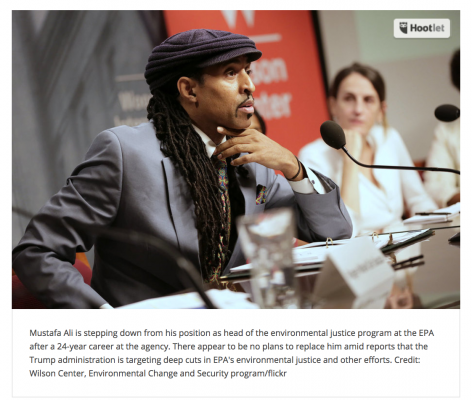 The head of the environmental justice program at the Environmental Protection Agency has stepped down, departing the government with a lengthy letter to Scott Pruitt, the EPA's new administrator, urging him not to kill the agency's programs.

Mustafa Ali, a senior adviser and assistant associate administrator at the agency, worked to alleviate the impact of air, water and industrial pollution on poverty-stricken towns and neighborhoods during nearly a quarter century with the EPA. He helped found the environmental justice office, then the environmental equity office, in 1992, during the presidency of President George H.W. Bush.

Ali leaves the EPA as Pruitt, who took office Feb. 17, prepares to implement deep cuts in the agency's budget and staff. A Trump administration proposal would cut the EPA's $8 billion budget by $2 billion and reduce its roster of 15,000 employees by 20 percent. An internal memo obtained by multiple news outlets on March 1 called for a complete dismantling of the office of environmental justice and elimination of a number of grant programs that address low-income and minority communities. A story in the Oregonian reported that funding for the office would decrease 78 percent, from $6.7 million to $1.5 million.