Posted by jonehopp on Wednesday, 22 March 2017 in Climate Change

The Implications of Ice Sheet's Demise 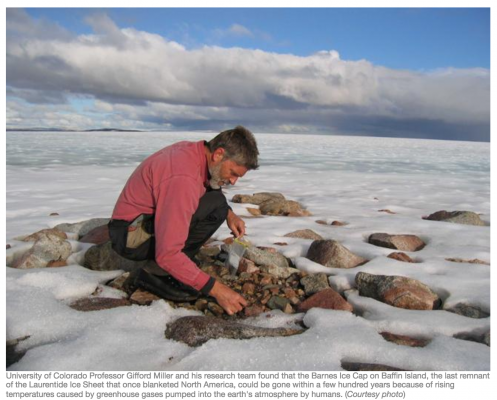 Flying over the remote during research at the Barnes Ice Cap on Baffin Island in 2009, a Boulder scientist saw dark where there should have been white.

Closer inspection revealed that what Gifford Miller spotted was the remnants of a 1963 geological camp that had been buried for decades by snow and ice. Long-abandoned tents and snowmobiles were being unveiled by melting of the ice cap, and that helped inspire a study that suggests a disturbing climate change signal.

Miller, a professor of geological sciences at the University of Colorado, is co-author of a paper published today in Geophysical Research Letters, which projects that the Barnes Ice Cap could vanish entirely within a few hundred years if greenhouse gas emissions continue apace.

Such an event is nearly unheard of, researchers said, in the last 2.5 million years.

The Barnes Ice Cap, about the size of Delaware, is the last remnant of the Laurentide Ice Sheet, which once covered much of North America. It was still a mile thick in present-day Chicago about 20,000 years ago, and started to recede significantly about 14,000 years ago as the planet passed out of its last ice age.

"This is the disappearance of a feature from the last glacial age, which would have probably survived without anthropogenic greenhouse gas emissions," Adrien Gilbert, lead author of the study and a glaciologist at Simon Fraser University in British Columbia, said in a news release.

Miller, also a fellow at CU's Institute of Arctic and Alpine Research, said in an interview that the takeaway from the study is not so much the potential fate of the Barnes Ice Cap, but the wider implications of its demise.

With a presumed vanishing of the Barnes Ice Cap, Miller said, "We can say with pretty good confidence that at least the southern portion of the Greenland Ice Sheet should (also) disappear. It really turns into a sea level rise issue. And then, that's got global consequences."

Dramatic melting of the Greenland Ice Cap, Miller said, would have an impact in the Antarctic, the world's single largest mass of ice.

"It is so cold there, that almost none of its mass loss is from melting," Miller said of the Antarctic. "It is from calving off of icebergs, and that is largely determined by seal levels.

"If sea level rise that is going on lifts some of those shelves, you will lose mass not by melting but by breaking off of the ice sheet. There is no other really giant ice cap that is sea-level controlled like the Antarctic. If that starts to go, that just intensifies (global) sea level rise."

The scientists involved in the Barnes Ice Cap study — in addition to measuring changes in the height of the Barnes Ice Cap — also utilized ice-penetrating radar aboard a NASA aircraft, to reveal its subglacial topography, which proved key to developing computer models to predict the future evolution of the Ice Cap. The aircraft was authorized by Waleed Abdalati, now director of Boulder's Cooperative Institute for Research in Environmental Sciences, while he was previously chief scientist at NASA.

Additionally, a study of isotopes created by cosmic rays and trapped in rocks around the Barnes Ice Cap showed that there were at most only three times in the last 2.5 million years when the ice cap has been so small. The researchers project it could be gone entirely within 200 to 500 years.

The great challenge facing humankind, Miller said, is if melting and resulting sea level rise were to occur at a pace faster than anticipated. It is hoped that more detailed sampling at the Barnes Ice Cap could help better forecast those scenarios.

"If sea level changes slowly, we're clever people; we can move Miami inland, if it is not too quick," Miller said. "But if the changes are rapid, then it's really catastrophic.

"The sea level rise is the most confident prediction you can make, as you look into the future. It's the speed that starts to become the key term that we'd like to clarify."