Can We Save the Oceans By Farming Them? 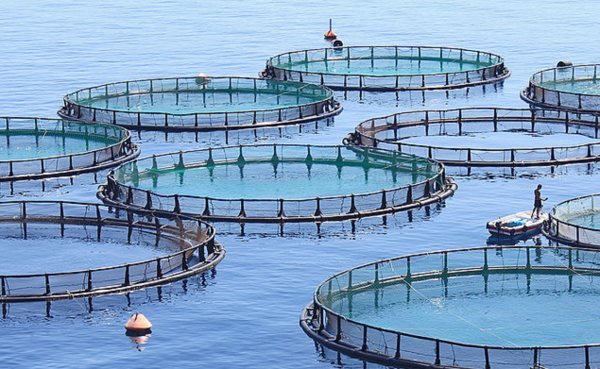 Bren Smith, a 44-year-old Newfoundland-born former cod fisherman, grows shellfish and the newly trendy sea vegetable kelp on what he calls “the world’s first 3D ocean farm” off the Connecticut shore in Long Island Sound. His multi-species hanging garden has already become a model for a new kind of low-impact aquaculture that, he says, can produce the cheapest and most ecologically sustainable food on the planet.

“I don’t call it aquaculture,” Smith corrects me, as his 24-foot lobster boat, Mookie III, cruises through a maze of buoys in the Thimble Islands, an archipelago of small, wooded islets just off the coast. He wants nothing to do with the conventional aquaculture industry, which he says has exported the bad habits of land-based agriculture to the sea — creating sterile monocultures; fouling coastal waters with pesticides, antibiotics, and organic pollutants; and endangering wild fish stocks through the spread of diseases from their less-healthy domesticated cousins.

Unlike most terrestrial farms or conventional aquaculture, Smith’s low-tech approach has no need for agro-chemicals, fertilizer, or antibiotics. In season, 20-foot fronds of leathery brown sugar kelp grow from taut horizontal lines connecting the farm’s buoys. Steel cages and nylon socks stocked with shellfish dangle below the water’s surface.

Smith says that his brand of integrated “ocean farming” actually revitalizes degraded or dying ecosystems by creating seaweed groves that become nurseries and sanctuaries for many marine species. It’s a pro-active approach to conservation, he says, that goes beyond the growing movement to create no-fishing reserves. “In an era of climate change, you could set aside the entirety of the world’s oceans in preserves and they are still going to die,” he says. “What we really need is engines of restoration within our conservation zones.”

Restorative ocean farming is gaining traction in other parts of North America. In Maine, Paul Dobbins, the founder of Ocean Approved, started what he calls America’s first integrated seaweed and oyster farm in 2009, producing kelp cubes for use in smoothies, as well as a line of kelp “sea slaw,” “sea rounds,” and “wraps.” In Alaska, 31 sea farms are now operating; five are growing kelp along with oysters and other shellfish. The Canadian company Cooke Aquaculture just added kelp and mussel production to a salmon farm in New Brunswick. The kelp recaptures some of the nitrogen and phosphorus released from wastes that escape from the aquaculture pens, helping make salmon farming — whose high concentration of fish produce large amounts of fecal material — measurably cleaner.

And in Tamil Nadu, in southern India, small seaweed farms have augmented their production by adding cages in which fast-growing cobia fish are raised. One operation there plans to raise mussels, oysters, and lobster in conjunction with seaweed farming.

These initiatives are paying economic as well as ecological dividends for the small but growing cadre of ocean farmers. On each of his 20 acres at the Thimble Islands Ocean Farm, Smith harvests up to 30 tons of kelp per year — a yield that dwarfs what is grown on most land-based farms — as well as roughly 250,000 oysters, mussels, and scallops. At that rate of production, ocean farms totaling the size of Washington State could feed the entire planet, he asserts.

But producing truckloads of seaweed — an integral part of his operation — is the easy part. Getting Americans in particular to eat it has proven a lot harder.

Kelp has been added to stews and broths and processed into sushi wrapping in East Asia for centuries. Still, it remains mostly a novelty here. Smith has enlisted chefs, such as Brooks Headley of New York’s vegetarian Superiority Burger, to develop dishes that people will want to eat. While at Del Posto restaurant in New York, Headley served barbecued gluten-free kelp noodles with parsnips and breadcrumbs.

The market for kelp has grown in recent years as consumers become aware of its nutritional benefits. Smith boasts that kelp provides more protein than soy, more vitamin C than orange juice, as much heart-healthy Omega 3 fatty acids as many fish, as well as minerals like iodine, zinc, and magnesium that have made it a favorite with the supplement industry.

Smith says he can no longer keep up with the demand from gourmet eateries and specialty food manufacturers. He hopes that the modest popularity of kelp portends a larger trend to come. “We are trying to reimagine the seafood plate,” he told me. “We need to push wild fish to the edges — make it an occasional treat for special occasions — and put sustainably produced bivalves and sea vegetables at the center.”

Smith has set up the non-profit GreenWave to offer hands-on training to future ocean farmers. To date, 10 apprentices have set up their own farms, mostly in New England, with 10 more soon to do so, Smith says. GreenWave guarantees the purchase of 80 percent of the farmers’ crops at triple the market rate for the first five years. The organization has also established the largest kelp hatchery in the world in an economically challenged neighborhood of New Haven, Connecticut, as well as a farmer-owned facility to process, store, and ship members’ produce.

“We’re not franchising this like McDonalds,” says Smith. “That’s the old economic model. We’re offering our farm plans for free to anyone who wants them, so that folks can set up their own businesses. But we’ll give them help with the supply chain.”

GreenWave is also talking with the U.S. Department of Energy about developing biofuels from kelp, according to Smith. Initial feasibility studies suggest that an acre of kelp can produce 2,000 gallons of ethanol, five times the amount derived from corn. And GreenWave has partnered with the Yale Sustainable Food Program to create kelp-based organic fertilizers.

Years of research will be required before these applications become commercially viable. But seaweed farming is already experiencing a small boom in Maine and southern New England, due in part to fears that product from Asia may be tainted with radioactivity from the Fukushima Daichi power plant.

Smith says he sees concrete evidence of the restorative value of combined kelp/bivalve cultivation at his own farm. With the help of his farm manager, Asa Dickerson, Smith winches up a tiered lantern-net holding baby mussels, along with two hitchhiking soft-shelled crabs.

“Those crabs are a sign that we’re rebuilding the ecosystem,” he effuses. The farm’s underwater scaffolding provides a home for crabs and other invertebrates and marine plants. “The best commercial and recreational fishing is right here,” Smith says with a sweep of his arms. “That’s because we’re creating a reef that is bringing the life back.” Anybody can fish, swim, or boat on the premises. “We don’t own the property, we’re just renting it,” says Smith, who pays the local municipality $50 per acre for the right to farm in the bay.

Shoreline communities are offering concessional rates to ocean farmers in part because they recognize the environmental benefits. They are benefits that University of Connecticut marine biologist Charles Yarish has been scientifically documenting.

Smith approached Yarish, a seaweed expert, after hurricanes Irene and Sandy smothered Smith’s shellfish beds under blankets of mud. Yarish introduced Smith to the ocean farm idea, whose key feature is suspending the growing area above the sea floor, making it less vulnerable to storms.

Yarish is bullish on kelp, which he says helps to combat two of the biggest threats to life in the seas. The first, ocean acidification, has negatively impacted the ability of bivalves to produce shells. Yarish reports that billions of commercial oyster seed perish every year from the acids created when excess carbon dioxide migrates from the air to the water. Kelp gobbles up the greenhouse gas at five times the rate of land-based plants, helping to locally mitigate acidification.

Kelp also has a hankering for nitrogen, which is a pollutant. “The number one problem in coastal zones of the U.S. is that we have too much of [nitrogen-rich] nutrients in the water, from agricultural runoff and point-source pollution from facilities like sewage treatment plants,” Yarish said.

These nutrients cause blooms of phytoplankton that decompose at the ocean’s bottom, depleting coastal waters of the oxygen needed to support life. It is a process that can result in massive dead zones, like the one located at the outflow of the Mississippi River into the Gulf of Mexico, which is currently larger than the states of Connecticut and Rhode Island combined.

Long Island Sound is also under threat, especially during the months of August and September, when the warmer waters are poorest in oxygen. The good news, says Yarish, is that “shellfish like oysters and fast-growing seaweeds like kelp can extract large quantities of nutrients and nitrogen out of the ocean.”

Connecticut is the first state in the country to develop a nitrogen-trading program (similar to the carbon-trading system currently in place in California) through which sewage treatment plants are compensated for upgrading their facilities to cut down on the nitrogen they discharge into the state’s waterways. Yarish is hoping that the program will be expanded to compensate ocean farmers for helping to lower nitrogen levels in the Sound.

Bren Smith goes still further in urging government to sponsor a large-scale project to help jumpstart “the blue-green economy.” He is calling for a research push to create profitable new products from the estimated 10,000 edible sea vegetables.

Researchers are finding that growing kelp, eelgrass, and other vegetation can effectively absorb CO2 and reduce acidity in the ocean, which could mitigate the damaging impacts of acidification on marine life. Read more.

For their part, Smith says, environmentalists should forego their usual antagonist role to industry and become boosters of climate-friendly ventures like ocean farming. “The new face of environmentalism is restoring the planet, creating a robust economy, and addressing economic injustice — all at the same time,” he says. “My job is to prove that the model is economically viable at the scale that the fishing industry was.”

The challenge is to reinvent fishing in a way that helps rather than hurts the environment, says Smith. “We fisherman can’t chase fish anymore, we can’t be hunters,” he told me. “We miss that, I miss that.” But Smith maintains that as ocean farmers, “we can keep the core of what we do as a profession: own our own boats, succeed or fail on our own terms, live out on the water, and have the incredible pride of continuing to feed the country.”

It is a message that has been resonating with young people like Nick Pastore. Pastore worked on a land farm after he graduated from fisheries school at the University of Connecticut. “My dream was always to have my own farm,” Pastore says. “But land in my area is going to housing subdivisions; it’s becoming too expensive for people like me who have not inherited our own farms.”

When he read about the low initial costs for ocean farming, Pastore contacted Smith, who trained him and helped him lease his own corner of the bay where Smith’s farm is located. “I get to farm and create a terrific local product,” said Pastore, who will begin operations next year. “But I’ll also be restoring an ocean habitat. It’s exciting to think that I can make that kind of change.”

Richard Schiffman is a New York-based environmental journalist, poet, and author of two biographies. His work has appeared in the The Guardian, The Washington Post, The Christian Science Monitor, and on National Public Radio, among other outlets.