Posted by Janna on Monday, 17 April 2017 in Environmental Heroes 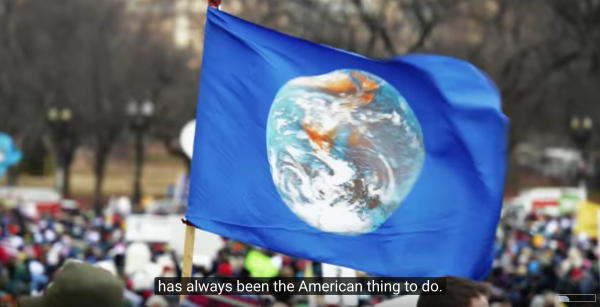 Sierra Club today released an inspirational video promoting the Peoples Climate March on April 29 in Washington, D.C. and 85 sister cities across the globe. The video weaves together excerpts and themes from historic documents, speeches, and iconic American moments to convey the message that the guarantee of justice for all and the protection of every person in the United States are fundamental values promised at the founding of the country that must be vigilantly pursued and protected.

Created to raise awareness about the march and inspire participation, the short film features narration by Academy Award-nominated and Golden Globe-winning actress Chloe Sevigny and Joseph Gordon-Levitt (Snowden, Inception), with music by Unsub Records’ latest signee, CYN. Darren Aronofsky, a board member for the Sierra Club Foundation, serves as executive producer. The project is a collaboration between Chromista, All City and Sierra Club.

“I joined the first Peoples Climate March in 2014, and to be honest, I didn't know if it would make a difference.” said Gordon-Levitt. “But then it did. I was pleasantly surprised and encouraged to see it lead to real legislation that could help make a difference. Now those policies are under attack. So it's time to march again.”

"The climate crisis is the greatest threat to our country,” said Aronofsky. “It is our patriotic duty to fight for it and this video is a reminder that protecting the land and the people have always been the right thing to do. Our voices must be heard. We must march to protect the future of our country, and our planet on April 29.”

The short film features both breathtaking and heartbreaking imagery set to a script with excerpts from The Declaration of Independence, The Constitution, The Gettysburg Address, God Bless America, the Statue of Liberty Inscription, and The Oath of Office of the President of the United States.

The Peoples Climate March is on April 29, President Trump’s 100th day in office, in Washington DC and 85 sister cities. Please visit sc.org/pcm to find a rally near you and RSVP.