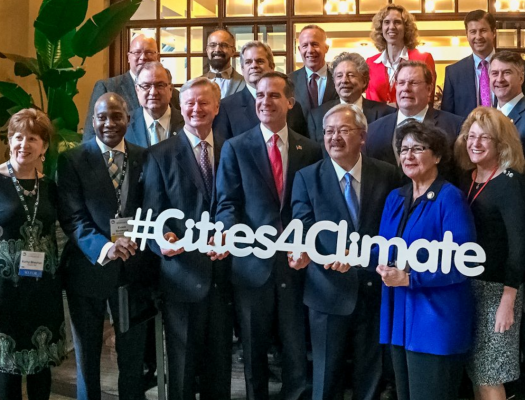 Mayor Eric Garcetti today led a coalition of mayors across the United States in denouncing President Trump’s decision to walk away from the Paris Climate Agreement.

“Climate change is a fact of life that people in Los Angeles and cities around the world live with every day. It is a grave threat to our health, our environment, and our economy — and it is not debatable or negotiable,” said Mayor Garcetti. “This is an urgent challenge, and it’s much bigger than one person. With the President pulling out of the Paris Climate Agreement, L.A. will lead by committing to the goals of the accord — and will work closely with cities across America and the world to do the same.”

On Wednesday, Mayor Garcetti worked with Los Angeles City Councilmember Mike Bonin to have a City Council motion introduced instructing the Los Angeles Department of Water and Power, and other City Departments, to adopt the principles of the Paris Climate Agreement as the policy of the City of Los Angeles. Councilmembers Nury Martinez, Paul Koretz and Paul Krekorian joined in the motion.

The Mayor is a co-founder of the Mayors National Climate Action Agenda (“Climate Mayors”), which today issued the following statement signed by Mayor Garcetti and 60 other mayors of cities from coast to coast:

“The President’s denial of global warming is getting a cold reception from America’s cities.

As 61 Mayors representing 36 million Americans, we will adopt, honor, and uphold the commitments to the goals enshrined in the Paris Agreement. We will intensify efforts to meet each of our cities’ current climate goals, push for new action to meet the 1.5 degrees Celsius target, and work together to create the 21st century clean energy economy.

We will continue to lead. We are increasing investments in renewable energy and energy efficiency. We will buy and create more demand for electric cars and trucks. We will increase our efforts to cut greenhouse gas emissions, create a clean energy economy, and stand for environmental justice. And if the President wants to break the promises made to our allies enshrined in the historic Paris Agreement, we’ll build and strengthen relationships around the world to protect the planet from devastating climate risks.

The world cannot wait — and neither will we.”

Mayor Garcetti is the co-founder of the Climate Mayors (also known as the Mayors National Climate Action Agenda, or MNCAA), a network of 88 U.S. cities representing more than 43 million Americans — working together to strengthen local efforts for reducing greenhouse gas emissions and supporting efforts for binding federal and global-level policymaking. Earlier this year, Mayor Garcetti led the release of an EV RFI with 30 MNCAA cities to demonstrate potential demand for over 114,000 electric vehicles, trucks, and equipment for cities. Mayor Garcetti is also Vice Chair of the C40 Cities ClimateLeadership Group, an international network of the world's megacities taking action to reduce greenhouse gas emissions, and he has signed the Covenant of Mayors for Climate and Energy.

Creating more than 20,000 green jobs while reducing the gap between the City and County’s unemployment rates, demonstrating that sustainability and prosperity go hand-in-hand

Achieving a record 20 percent reduction in water use per capita, making L.A. the most water efficient big city in America — since 2014, L.A. has reduced enough water to fill over 90,000 Olympic swimming pools

Installing enough solar in the last year to power over 12,000 homes, and leading American cities with more than 230MW of total installed solar power

Adopting the most ambitious and comprehensive energy and water efficiency law for existing buildings of any U.S. city

More than 80 percent of all City fleet procurements in the current budget year are electric vehicles — far exceeding the 2017 target of 50 percent, and giving L.A. the nation’s largest pure battery electric vehicle municipal fleet, as well as the largest electric vehicle police fleet