Posted by SynergyEnviro on Monday, 03 July 2017 in Arts and Entertainment 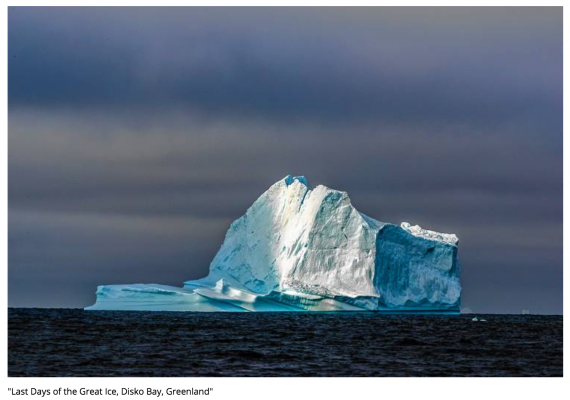 By EmmaJean Holley and Nicola Smith

“Most of these places are in really forbidding, hostile environments,” the Norwich-based photographer said in an interview at his home last week, itself located deep down the back roads. Though the Inuit people have built a life in the Arctic, it remains, in Gorman’s eyes, “the wildest place left on the planet.”

He has been making sojourns above the Arctic Circle for nearly 40 years, since he was a sophomore in college. Now 58, he seeks to capture not only its wildness, but also the lives and stories of the indigenous people for whom this formidable icescape is their ancestral home.

A selection of photographs from Gorman’s travels — largely to the Arctic, but also to landscapes closer to home — are up at the Geisel School of Medicine’s Williamson Translational Research Building, on the Dartmouth-Hitchcock Medical Center campus in Lebanon, where Gorman will discuss his work at a special showing tonight at 5:30. Because the display is located in a semi-private workspace area, the special showing is meant as an opportunity for viewers to engage more freely with the exhibit; outside of the showing, organizers ask that visitors observe the photos quietly and in small numbers, out of respect for those working nearby.

Gorman’s photographs of stark glaciers and twilit seas might sound as if they’d be at odds with the crisp, clinical environment of a research hospital. But that’s exactly why they’re there: to provide a reminder, no matter how briefly noted, of where we come from, said Marianne Barthel, the arts program coordinator at DHMC.

“There’s a lot of research out there that supports the benefits of having the natural world incorporated into the work environment as much as possible,” Barthel said. “It’s based on what’s called biophilia.”

Biophilia, a term coined by the Harvard biologist and author E.O. Wilson and the late Yale social ecologist Stephen Kellert in their seminal 1993 book, The Biophilia Hypothesis, literally translates to “love of life.”

It’s based on the idea that human beings depend on nature for more than survival — we also need it to help us find meaning in life. As Kellert writes in his introduction to The Biophilia Hypothesis, cultivating a connection with nature fulfills our “human craving for aesthetic, intellectual, cognitive and even spiritual meaning and satisfaction.” In severing our ties to the wild, he argues, we also disconnect from a major part of ourselves.

Kellert, as it turns out, was Gorman’s mentor at Yale, where Gorman studied biophilia as part of his master’s degree in environmental studies. Studying this concept in depth confirmed for Gorman what he’d always believed to be true: “A daily connection with nature, even in representative forms such as nature and photography, improves people’s lives measurably,” he said. “It benefits their health, their mental well being, their productivity. It lowers stress levels and increases positive outlook.”

He returned from his most recent trip up north in May. During the three-week dogsled expedition in Greenland, he stayed with the Thule Inuit, 78 degrees north of the equator. The Inuit are among the northernmost people on the planet, and people who Gorman said make up one of the few cultures that practice a truly biophilic lifestyle in the 21st century.

“These people are our last connection to our own human ancestry,” he said. “Ninety percent of that history was living as hunter-gatherers. Only very recently did we turn to agriculture and settled lives.”

He believes that Western society can learn much from the harmony the Thule have struck with their natural landscape.

But these changes have already begun in earnest.

In more recent trips to the Arctic, Gorman has been stunned by the disappearing icescape. In the summer of 2012, when he traveled up to the 80th parallel, “we saw not one bit of ice,” he said. On that same trip, he saw an emaciated polar bear, stranded on a rocky islet without food, close its eyes and not reopen them.

And, because the icescape is the foundation of their way of life, the Inuit face tremendous loss of culture in years to come, despite the adaptations they’ve made by incorporating modern tools, such as rifles and weather forecasts, into the hunt.

Gorman’s photography is his answer to what he sees as an ever-widening chasm between Western society and the wild. The presentation of those images is almost as striking as their contents: The photographs are large, spanning several feet in dimension, and frameless, so the border between workplace and water/land/sky is almost seamless.

Each photograph also rests behind a sheath of glass. And so, depending on how you focus your eyes, you can see your own ghostly form superimposed onto the gaping blue mouth of an ice cave (Arctic Dreams), or the gilded crests of waves within a fjord (Blue and Gold Reflections).

In this way, two seemingly disparate cultures coexist in a shared space: one that embraces and pursues technological progress, and one that is wary of modernity’s impact on tradition and collective memory.

In Laundry Day in Saattut, taken in Greenland, a laden clothesline hangs along the edge of the water, icebergs floating by in the background. In Iceberg Over Qeqertarsuaq, a vast blue body of ice looms over a tiny village, also in Greenland, where a few pickup trucks and a yellow tractor sit among a cluster of simple houses, built among exposed ancient stone.

Most of the photographs in the exhibit, though, are landscapes. These range from the icescapes that Gorman loves so deeply, to the grassy wetlands of outer Cape Cod, and the blazing autumn forests of Vermont.

Though these scenes, unpeopled and pristine, do have a serene quality to them, they also convey a certain urgency, a sense of needing to be seen. In the ominously titled Last Days of the Great Ice, taken in Greenland’s Disko Bay, the black sea carries an enormous iceberg, luminous and commanding and alone, whose bleakness and loveliness is like a glacial swan song.

“I just feel like I’m kind of the messenger,” Gorman said. “The glaciers that are receding. The ice that’s thinning. The bear that’s starving. Most people will never ride on dogsled through the icescapes of the Arctic, I know. But hopefully, I can help inject some biophilia back into this indoor world we’re living in, and help remind people who we are.”

Stephen Gorman will discuss his photography and his travels at a special viewing this evening in the Williamson Translational Research Building at Dartmouth-Hitchcock in Lebanon, room 571, at 5:30. For more information, visit www.dartmouth-hitchcock.org/arts.

Recently opened at the Norwich Historical Society is an exhibition devoted to the influential Mid-Century Modern style in architecture and design. In the post-war years artists and architects moved to Norwich and Hanover and brought the International Style with them. Think Mad Men. In conjunction with the show, there will be a home and garden tour on Saturday from 10 a.m. to 4 p.m. that will look at some mid-century houses in town. For information go to norwichvthistoricalsociety.org.