Posted by wadenorris on Thursday, 27 July 2017 in Climate Change 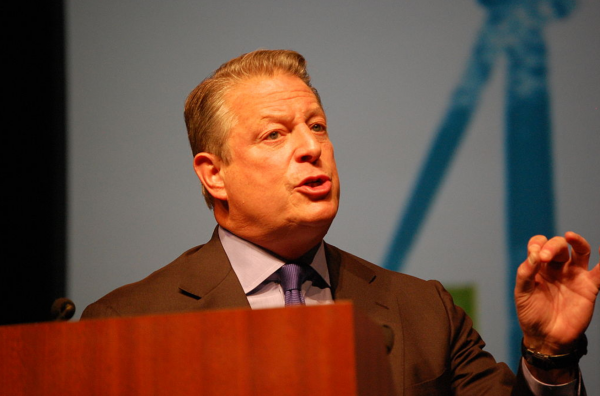 The former vice president and California Gov. Jerry Brown talked about efforts to combat climate change at a Hollywood screening of 'An Inconvenient Sequel: Truth to Power.'

Ten years ago, Al Gore showed the world the devastating effects of global warming with his Academy Award-winning documentary An Inconvenient Truth. On Tuesday night at the ArcLight Hollywood, he once again sounded the alarm over the devastating threat that climate change poses to our planet with his new film An Inconvenient Sequel: Truth to Power.

Despite President Donald Trump’s recent withdrawal from the Paris Climate Accord, Gore struck a note of optimism when discussing the future of the battle against global warming.

“We have the solutions now," he said. "Solar electricity, wind electricity, batteries in electric vehicles and soon electricity from renewable sources are going to be cheaper all over the world than fossil fuels. So we’re going to win this.” Ahead of the film's screening, the former vice president spoke with The Hollywood Reporter about the conversations he’s had with President Trump regarding the need to protect the environment.

“I spent a lot of time talking directly to him. I’ve had several conversations and unfortunately, I thought he would come to his senses, but I was wrong. When he made his speech pulling out of [the Paris agreement], I was concerned that that would lead other countries to do the same, but no, the entire rest of the world redoubled their commitment to solve this crisis," he added. "Then [California] Governor [Jerry] Brown, other governors and mayors stepped up here in the U.S. to say we’re still in the Paris agreement and we’re going to meet our commitments, and that’s really encouraging.”

While the film does contain dire warnings about the future of the planet if people do not combat climate change, it also showcases the extraordinary progress being made with clean and renewable energy as well as all of the jobs that are being created by these new technologies.

Gov. Brown, who was also in attendance at the premiere, spoke to why he would not give up the fight against climate change despite the president’s refusal to take it seriously.

“Climate change is real. It’s an existential threat. Trump pulling out [of the Paris agreement] means that California is pulling in and taking the lead," said Brown. "We’re doing something, but not enough. We’ve got to go a lot further, so that’s why this film is important, to wake people up to the real danger that if we don’t do anything we could go over a tipping point — and then it's too late.”

In addition to the film, Gore is attempting to empower environmentalists around the globe by launching a social impact campaign with Inconvenientsequel.com, which will provide guidance for individuals looking to do their part to fight for the environment.

The doc is being screened around Hollywood, including at Paramount Studios as the kickoff to KCET's Environmental Film Festival on Thursday. An Inconvenient Sequel will open in select cities on Friday and have a nationwide release on Aug. 4.