Posted by julesk00 on Monday, 14 August 2017 in Environmental Heroes

Millennials for Revolution On Climate Change 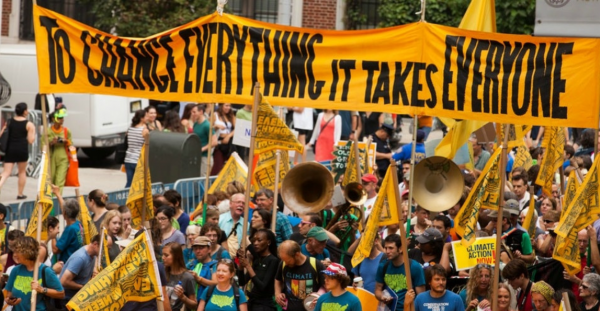 If progressives can’t take back control of the White House and Congress from climate change deniers in the next three years, it’s conceivable that humankind could be screwed. But evidence is mounting that a new political force is up to the task. It has millions of potential supporters across the US, the UK and Canada. It’s openly critical of capitalism. And it’s led by millennials such as Moumita Ahmed.

The 25-year-old activist is intimately aware of what’s at stake. She grew up in Queens, New York, and rose to prominence during the 2016 Democratic primaries as co-founder of a group now known as Millennials for Revolution.

She has since rallied thousands of people her age against Donald Trump’s travel ban and the Republican healthcare bill. Yet climate change is never far from Ahmed’s mind. Rising oceans directly threaten her family members back in Bangladesh. “It makes me so angry and upset,” Ahmed said. “But at the end of the day, I still believe there is hope.”

The window for hope is closing rapidly. Over 60 climate experts warned this June that we only have until 2020 to stop the worst damages of global warming. “While the world can’t be healed within the next few years, it may be fatally wounded by negligence,” argued Hans Joachim Schellnhuber, a leading climate researcher.

Trump is inflicting wound after wound. His exit from the Paris climate treaty is a blow to the global fight against climate change. Yet it’s only one of many concessions Trump’s made to the fossil fuel industry, which spent $36 million on lobbying from January to March alone, according to the Center for Public Integrity.

“I have been moving at record pace…to eliminate the barriers to domestic energy production,” Trump said recently. Oil and gas companies are delighted. “Not in our wildest dreams, never did we expect to get everything,” boasted an industry leader.

And Republicans in the House, the majority of whom deny the existence of climate change, are now rushing through legislation that “could provide bulletproof armor during future challenges to Trump’s agenda,” reportedInside ClimateNews.