EPA decision sets back proposal to mine in Alaska 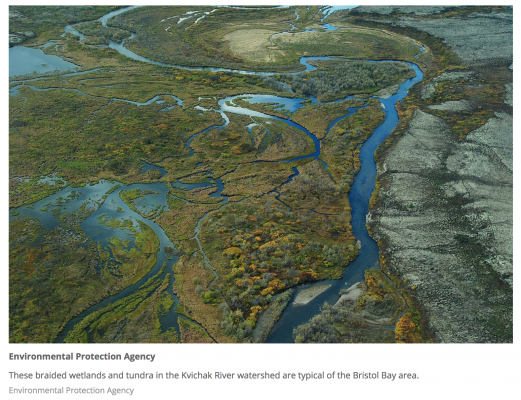 His decision, which falls short of blocking a proposed gold and copper mine in the region outright, represents a surprising twist in a years-long battle that has pitted a Canadian-owned mining company against commercial fishing operators, native Alaskans and conservationists determined to protect the world’s largest sockeye salmon fishery.

Last spring, shortly after meeting with the top executive from the main company backing the project, Northern Dynasty Minerals, Pruitt directed EPA staff to revisit the Obama-era decision to short-circuit the project using a provision of the Clean Water Act. The 2014 decision came after several years of scientific study during which the EPA determined that the mining operation could cause “significant and irreversible harm” to the area’s fish habitat.

On Friday, after receiving more than a million public comments and consulting with tribal governments and others, the EPA said it will leave the previous administration’s determination in place while it takes additional comments. The announcement said the decision “neither deters nor derails the application process” for the mine.

“It is my judgment at this time that any mining projects in the region likely pose a risk to the abundant natural resources that exist there,” Pruitt said in a statement. “Until we know the full extent of that risk, those natural resources and world-class fisheries deserve the utmost protection.”

An entity known as Pebble Limited Partnership has eyed the spot in southwestern Alaska, where the headwaters of several rivers converge, as a possible mine site for more than 15 years. But Northern Dynasty Minerals, the company leading the effort, didn’t file its first formal application for a federal permit until December.

The EPA’s announcement Friday noted that it “stands ready” to work with the mining company and the Army Corps of Engineers in reviewing the permitting application for the project.

Pebble Limited Partnership and its supporters, including Alaskan politicians such as U.S. Sen. Lisa Murkowski, a Republican, had criticized the Obama administration for issuing what amounted to a preemptive veto of the project. They argued that tapping the mineral reserves buried underneath the tundra will generate good-paying jobs for local residents and additional revenue for the state and federal government.

But opponents of the mine countered that any spill could imperil one of the world’s great fisheries, which accounts for roughly a quarter of the global supply of sockeye salmon.

Southwestern Alaska contains a reservoir of gold worth an estimated $120 billion, but the lakes and tributaries in the region feed into Bristol Bay and a fishery that generates $500 million a year.

In a statement Friday evening, Northern Dynasty Minerals appeared undeterred by the EPA’s shift. It noted that a settlement agreement with the agency last year provided “an unfettered opportunity” to proceed through the permitting process for the Pebble Mine project.

“We have every confidence that Pebble’s ultimate project design will meet the rigorous environmental standards enforced in Alaska and the U.S.,” chief executive Ron Thiessen said. “We expect the permitting process for Pebble to advance expeditiously over the next few years.”

At least for now, the EPA’s latest move on the project appears to be a rare win for environmentalists under the Trump administration, one that will further delay any eventual mine construction. While the company can continue pursuing federal permits, the EPA said it will not revisit its assessment until May 2021 or until the Corps of Engineers completes an environmental-impact study.

But Bob Irvin, president of the advocacy group American Rivers, said he was “very skeptical” of the announcement and doubts it represents any sincere effort by Pruitt to safeguard the environment.

Irvin said the decision likely was prompted by the legal challenges the agency would have faced if Pruitt failed to go through the same lengthy administrative process that the Obama administration undertook when it ruled against Pebble Mine.

”What they figured out is that you can’t just immediately reverse actions that were taken by the previous administration if those actions” were done legally, he said. “You actually have to be able to justify your decision. ... They are learning they can’t just run roughshod over the legal requirements.”

The Obama administration conducted a three-year review before deciding that, as Irvin put it, “this was basically the worst place in the world to locate a mine,” given its proximity to Bristol Bay’s stock of sockeye salmon.

Irvin said he suspects the move is part of a larger effort by Pruitt to “green” his image.

The EPA chief recently met with Moms Clean Air Force, a group formed to combat air pollution. And he has made a high-profile push to ramp up cleanups at a handful of Superfund sites around the country.

”But when you look at the actions he’s continuing to pursue, it’s clear his position hasn’t changed,” Irvin said. “Actions speak louder than words.”