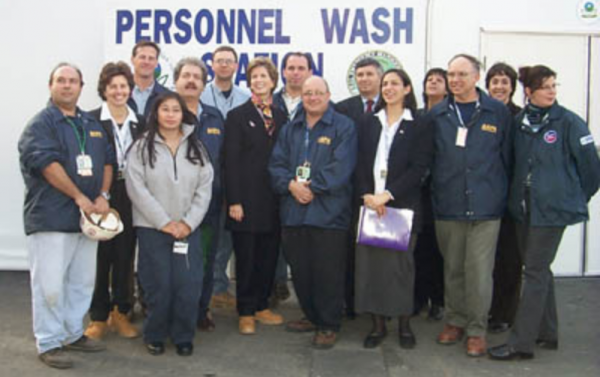 A demoralized workforce watching as its agency is dismantled by the very people charged to lead it: That is the grim state of affairs depicted by John J. O’Grady, a longtime employee in the Chicago field office of the Environmental Protection Agency, which is tasked with protecting the nation’s air and water, while preventing the exposure of citizens to harmful chemicals. The agency is doing none of that, in O’Grady’s telling, with career officials watching in dismay as EPA administrator Scott Pruitt seemingly lurches from one scandal to another while doing the bidding of oil barons and the chemical lobby.

O’Grady, an EPA engineer who is also a chapter leader in the American Federation of Government Employees, a public sector union, made his remarks in an on-the-record breakfast with journalists at the National Press Club, in Washington, D.C. Nearby, a television screen was tuned to CNN, where an anchor discussed Pruitt’s most recent alleged transgression: According to a Washington Post report published that morning, Pruitt had his most influential aide urging Republican donors to hire his wife Marlyn. The week before, it was reported that Pruitt wanted Chick-fil-A founder Dan Cathy to offer his wife a franchising opportunity with the fast-food chain.

It is not clear if Pruitt, a former Oklahoma attorney general who often spoke about “the rule of law” when resisting the social and environmental imperatives of the Obama administration, was aware that using his office for personal gain is unethical and potentially illegal. He is currently the subject of more than a dozen investigations, making him the most embattled of President Trump’s Cabinet members, several of whom are also under investigation.

But even as Pruitt continues to fight for his job, career officials at the EPA are fighting a different, countervailing battle, in what O’Grady depicted as a principled effort to save both the agency and the environment. At times growing indignant, the 34-year veteran of the EPA wondered if Pruitt and his closest advisers had any goal beyond self-enrichment: “Don’t these people have children? Don’t they have grandchildren? Don’t they care about other people at all?”

If the Trump administration does have a broader philosophy about the federal government, O’Grady believes it is the one expressed by former White House chief political strategist Stephen Bannon at the Conservative Political Action Conference in early 2017, just a few weeks after Trump’s inauguration: “the deconstruction of the administrative state,” a systematic dismantling of regulations coupled with a forcing from government employ of those who make rules and enforce them.

“This is an administration that truly is set to carry out the Heritage Foundation’s desires and wishes,” O’Grady said, referencing the conservative think tank. He noted that the White House hired Heritage labor scholar James Sherk as an adviser in 2017. An activist affiliated with the conservative network funded by brothers Charles and David Koch, he has advocated for the limiting of the power of unions, like the one to which O’Grady belongs.

Given the Trump administration’s antipathy to the federal bureaucracy, and to environmental regulation in particular, it is little surprise that O’Grady describes the workforce as “disgusted” and “afraid.” He says that Pruitt’s political appointees have made efforts to silence and intimidate career officials. But, he cautioned, “You won’t see any memos. They’re too smart” to leave written evidence, instead relying on “one-on-one discussions.” In May, Pruitt demoted several EPA officials for questioning his lavish spending on travel, decor and security. He had previously hired a Republican opposition firm, Definers, for purposes that may have included monitoring career staff interactions with the press (the contract with Definers was canceled).

Asked to respond to some of the allegations O’Grady made about Pruitt, EPA spokesman Jahan Wilcox sent Yahoo News the following statement: “From advocating to leave the Paris Accord, working to repeal Obama’s Clean Power Plan and Waters of the United States, declaring a war on lead and cleaning up toxic Superfund sites, Administrator Pruitt is focused on advancing President Trump’s agenda of regulatory certainty and environmental stewardship.”

O’Grady joined the EPA in 1981 as a contractor and, three years later, became a full-time employee. He remembers the contentious rule of Anne Gorsuch Burford, mother of current Supreme Court justice Neil M. Gorsuch. He also remembers, longingly, the tenure of William Ruckelshaus, appointed first by President Richard Nixon, who created the EPA, and a decade later by Ronald Reagan, just as O’Grady was beginning his career there. “I don’t care what party they are, I just want them to do the job they’re assigned to do,” O’Grady says, calling Pruitt the most corrupt administrator in the agency’s history.

A not-insignificant number of Republicans are coming to share that opinion. Shortly after O’Grady met with reporters, Fox News primetime host Laura Ingraham became perhaps the most prominent of the president’s allies to call for Pruitt’s ouster. In a tweet citing Pruitt’s “bad judgement,” she offered a pithy verdict: “Gotta go.” The same day, National Review, a magazine admired by the Republican establishment, published an editorial that said “Pruitt is replaceable. And he should be replaced.”

But Trump expressed confidence in Pruitt as recently as last week, after a relentless cavalcade of scandals that included reports of inexplicable quests for used mattresses and moisturizing lotion. O’Grady was similarly resigned to Pruitt’s tenacity: “I anticipate he may be in office for a while,” he said, while also predicting that his continued tenure could prove useful in Democrats in November, providing them with a powerful symbol of Trump’s failed promise to “drain the swamp.”

For now, he urges other EPA field offices to be as vociferous as his in Chicago, which he believes, based on reports he has heard, may still come in for retribution from Pruitt. That doesn’t seem to bother O’Grady in the least. “When you stick your head in the sand, the rest of your body is still standing upright,” he said, singling out the offices in Boston, New York and Kansas City in particular for their timidity. He added that “the only way to resist is to stand up and tell the truth.”