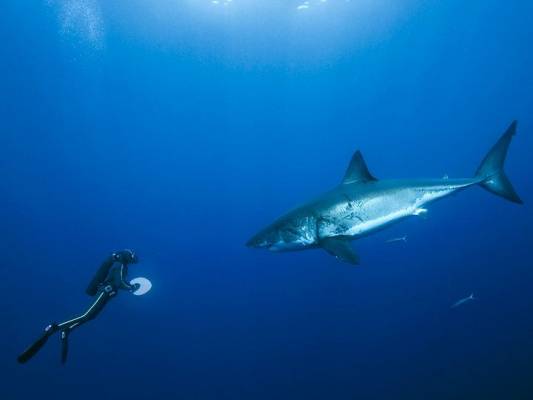 China’s hunger for shark fins has been filled largely by Indonesia, home to numerous shark species spread throughout the vast archipelago.  Could the tide be turning on the grisly practice of shark finning?

Growing international pressure against shark finning has contributed to the decline, according to a recent report in Time magazine, leading to shifts in attitudes and policies in China, where shark fins are considered a delicacy.

China’s hunger for shark fins has been filled largely by Indonesia, home to numerous shark species spread throughout the vast archipelago, which has seen rampant overfishing of sharks (as well as mantas, whose gills are similarly prized for dubious medicinal purposes).

The practice is as brutal — once caught, the shark’s fins are cut off, its carcass tossed overboard — as it is impractical: The sharks are worth more alive than dead, their value to tourism far outstripping the price of their fins in a Guangzhou market.

Sharks need our help Few animals are as vital to the health of the oceans — or as misunderstood — as sharks. For years, Conservation International has worked to protect them. You can help: Sign up for email updates here or donate here.

The value of sharks to local economies has been hammered home over the years by groups including Conservation International (CI), which has worked closely with the Indonesian government. As a result, Indonesia has recently begun to take steps to protect sharks and mantas, among them the creation of sizable marine sanctuaries for these species.

Since the creation of the Raja Ampat Shark and Ray Sanctuary in eastern Indonesia in 2013, “we are slowly beginning to see a recovery of the shark population in these waters,” said Abraham Sianipar, who leads CI’s shark work in Indonesia. “Now comes the most challenging part: enforcing the regulation and patrolling the waters.”

Given the difficulties in enforcing such a large area of ocean, Indonesia has taken to sending a high-profile message to poachers by seizing and sinking their boats. Increasingly, for many fishermen in Indonesia and in India — another major shark-fin exporting country — shark finning is no longer worth it.

“There is too much effort but less output,” marine biologist Vardhan Patankar told Time, speaking about fishermen in India’s Andaman Islands. “Now they fish for groupers, and groupers give them more money.”