Posted by plantitfilm on Thursday, 13 September 2018 in Climate Change 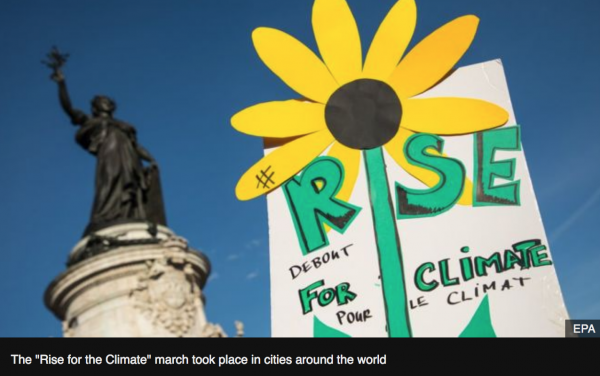 Hundreds of demonstrators crowded the streets of downtown San Francisco on Thursday morning, banging drums and chanting as they called on local and world leaders at the Global Climate Action Summit to do more to address climate change and pollution.

“We’re fighting for future generations,” said Dorthea Enrique, who traveled from Detroit to take part in the protest. “We want them to listen to our voices and protect us from corporate greed.”

It was the third day of demonstrations this week. On Saturday, thousands had marched through the city for “climate, jobs and justice,” and Monday saw about 200 people, mainly indigenous groups, protesting Gov. Jerry Brown’s Climate and Forest Task Force.

Thursday morning’s demonstration came on day two of the summit, which has drawn more than 4,000 elected officials, business executives and environmentalists from six continents to San Francisco for a three-day conference aimed at addressing carbon emissions and climate change.

Demonstrators outside the conference’s main venue at the Moscone Center said they were frustrated that they could not participate in the discussions inside and wanted to make sure their voices were heard.

In a call-and-response outside, they yelled: “What do we want? Climate justice!”

Protesters crowded the intersection of Howard and Third streets outside the Moscone Center throughout the morning, forcing summit delegates to climb over barriers or go around the gathering.