Scientists Are Rebuilding Our Coral Reefs 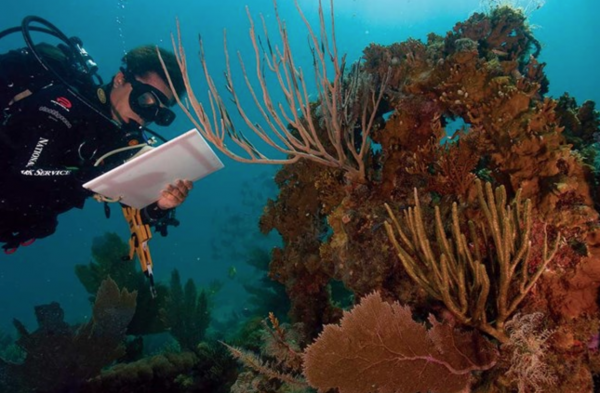 This year's extreme storms have further damaged coral reefs—an ecosystem that was in bad shape to begin with. Corals thrive in warm, tropical waters, and even slight shifts in temperature and acidity can throw them off. Though warming oceans have threatened their livelihood for years, 2016 and early 2017 proved an especially warm period, which led to the worst coral bleaching event in recent history. Coral bleaching occurs when the beneficial bacteria that feed corals begin to die off, leaving reefs starving and close to death.

Coaxing coral back to life.

Warmer temperatures, along with overfishing, runoff, and dredging, have now killed off nearly 50 percent of the world's coral reefs. Scientists are warning that reefs could be a thing of the past as soon as 2050.

Reefs are good for a lot more than just a beautiful photograph, and this mass extinction would be felt around the world. Reef tourism has historically brought billions of dollars a year to economies like Australia and Hawaii, and low-lying lands depend on reefs as natural barriers from storm surges. An estimated 500 million to 1 billion people rely on nearby reefs for food, and certain Pacific islands get 70 percent of their protein from them. Once these food sources run dry, the island's inhabitants are forced to move inland, becoming what's known as "ecological refugees."

The first step in nursing these important ecosystems back to health is decreasing the rate of climate change. "There's no scientific doubt that warming oceans are driving these dramatic increases in bleaching events," says Joe Pollock, the coral strategy director for The Nature Conservancy, a green nonprofit. "Slowing the rate of climate change is the single most important thing we can do to not only protect corals but keep systems alive around the world." However, this won't happen overnight, and we need to find a way to nurse coral back to health in the meantime.

One way we can start to do so is with policy. Ecologically protected areas, like the one established by then-president Obama in 2016—a nearly 600,000-square-mile expanse in Hawaii—regulate the amount of fishing that can happen around a reef and therefore increase its chance of survival.

As the oceans continue to warm and coral continues to die off, though, scientists are also banding together to find innovative new ways to take matters into their own hands.

"This is a field that's definitely growing," Pollock says of reef restoration. "People are starting to realize that no coral reefs on the face of the planet are immune to the degradation we are now seeing. What we're doing right now isn't enough."

"It's so depressing to see what's happening in the reefs," says Ruth Gates, Ph.D., previously a professor of ocean science who is now spearheading research on how reefs can survive a warmer future out of the Hawaii Institute of Marine Biology. "Watching their decline has made me think much more comprehensively about how we can take science and use it to solve the problem rather than just monitor it. For me, having an avenue to try things that could help the prognosis is the only way I can live with being a coral biologist at this time."