Posted by plantitfilm on Saturday, 05 October 2019 in Environmental Heroes
Featured

"We teenagers and children shouldn't have to take the responsibility." the teenage climate activists said. "But right now the world leaders keep acting like children, and somebody needs to be the adult in the room."

Thunberg drove to Iowa City on Friday in a Tesla to lend a hand to the local teens waging their own climate strikes.

Her message to her peers in the Midwest was one of distrust and motivation. The 16-year-old, fresh off a damning speech at the United Nations, said Iowans cannot expect global leaders to take action to stop the flow of carbon dioxide emissions causing global warming.

They, too, must act. 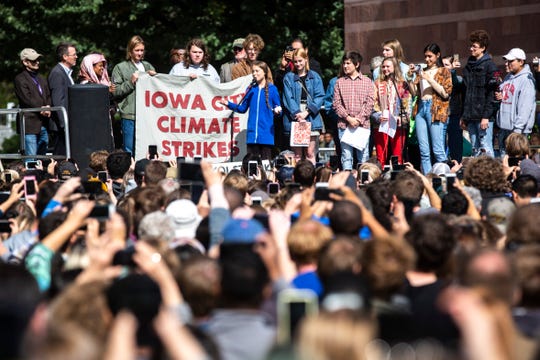 "We will not beg world leaders to care and to act," she said. "They have ignored us in the past and they will ignore us again. We will instead tell them that if they won't do it, then we will."

The 16-year-old Swede said she sees a tipping point. More and more people around the world are becoming activists.

"Together, we are unstoppable," she said.

Thunberg traveled to the United States in August on a sailboat to reduce emissions. In September she delivered a biting speech to world leaders at the United Nations in New York.