Posted by allanhernsh on Sunday, 22 December 2019 in Environmental Heroes
Featured

Greta Thunberg’s story: the girl who woke up the world

BY HANNAH KEEGAN FOR PEOPLE

Greta Thunberg has got our attention. Now, her generation is poised to make a real difference.

Greta Thunberg was 15 when she turned up at the Swedish parliament in 2018 on a one-teenager protest against climate change. In the year since, her accomplishments read like a lifetime of achievements: named Person of the Year by Time magazine; Swedish Woman of the Year by the Swedish Women’s Educational Association; nominated for the Nobel Prize; awarded the Ambassador of Conscience Award by Amnesty International; presented with the International Children’s Peace Prize of 2019 by Desmond Tutu; and featured on the cover of Meghan Markle’s issue of Vogue.

She’s spoken at the UN and made those in power not only answerable to her questions but nervous of them too. World leaders have started to take action, labelled ‘the Greta effect’. Not bad for a teenager who, by her own admission, didn’t even like to talk in class.

But why Thunberg? Political commentator Isabel Oakeshott says, “Greta Thunberg is an extraordinary phenomenon. She has forced politicians in the UK to confront an issue many would rather ignore and propelled climate change to the top of the political agenda. In a short space of time, a 16-year-old with a smart PR and social media operation has achieved more than years of international summits and lobbying by big names. To have made an impact on this scale is quite incredible and she deserves huge credit.”

Thunberg’s original plan was to sit outside parliament with a cardboard sign that read: skolstrejk för klimatet (school strike for the climate). Passers-by (politicians, secretaries, the general public) would see her, a teenager – long, honeyed hair braided into two plaits, dressed in leopard print leggings and a blue hoodie – and wonder, why isn’t that girl in school? Then, when they asked, she would hand them a flyer that gave them an explanation: “We kids most often don’t do what you tell us to do. We do as you do. And since you grown-ups don’t give a sh*t about my future, I won’t either. My name is Greta and I’m in ninth grade. And I refuse school for the climate until the Swedish general election.”

Thanks to that original plan, Greta has become a world icon, reaching the ranks of those known only by their first name. Her mission has stretched far beyond that day but its roots can be traced back much earlier to her family and childhood. Growing up with her mum, an opera singer, her actor father and her 14-year-old sister Beata, she was instilled with a commitment to caring for the environment by her mother’s own passions (she won the WWF Sweden Environmental Hero of the Year Award in 2017).

When Thunberg was nine years old, she says she heard the phrase ‘climate change’ for the first time. “[At school] they were always talking about how we should turn off lights, save water, not throw out food […] I thought this was very strange. If humans could really change the climate, everyone would be talking about it […] But that wasn’t happening,” she told The New Yorker.

She began doing her own research and looking for ways to help. At 12, she stopped eating meat, refused to take flights because of the carbon emissions and persuaded her parents to do the same, resulting in her mother giving up an international career. The family installed solar panels on their house and began growing their own vegetables.

But then Thunberg quietly fell into a deep depression. She stopped talking, eating and spent time off school. In Scenes From The Heart, her mother’s memoir, she talks about the difficulties of living with her daughter’s illness: meticulously recording her food intake, managing her mood. When her eating disorder stabilised, she was given an official diagnosis: Asperger syndrome. Then things began to change. In the summer of 2018, an unusual heatwave hit Sweden, causing wildfires to spread across the country and turning Thunberg’s energy outward. “I got out of that depression by thinking to myself that I could do so much good with my life,” she said.

Inspired by the anti-gun protests by survivors of the Parkland shooting in Florida, she started a weekly school strike, charting it on social media and drawing politicians into her public charge. Her Twitter following has since grown to more than 3 million and her Instagram page, once a place for pictures of the vegetables she was growing and her dog Roxy, with 8.4 million followers quickly turned into a call to action. 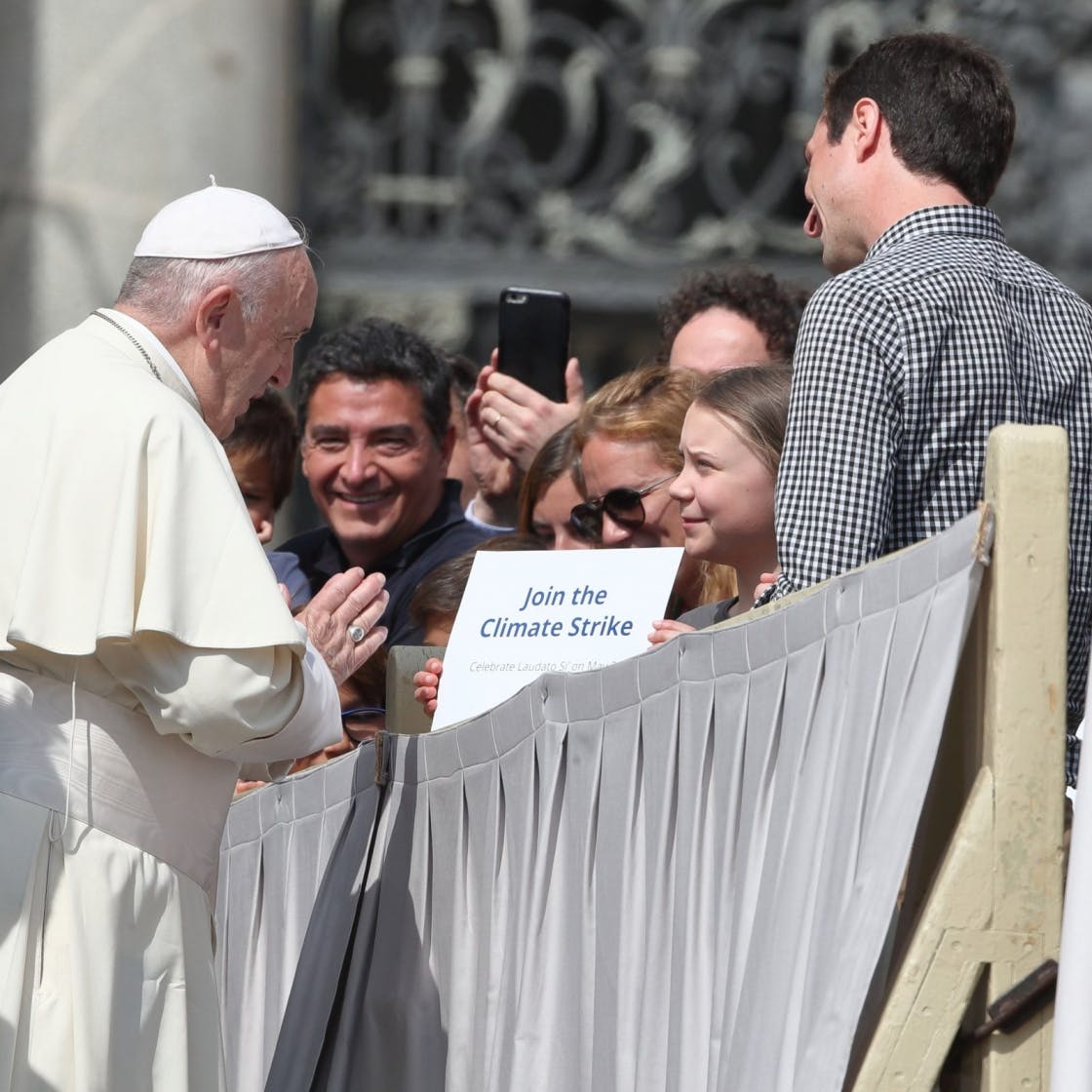 Greta met the Pope in April this year

In interviews, Thunberg is a calm but intense presence. When she appeared on The Ellen Show last month, she winced at the applause from the audience and answered questions with a disarming pragmatism. When asked if she would ever sit down with Donald Trump, she deadpanned, “I don’t understand why I would do that”, to a room that dissolved into laughter and cheers. She calls her Asperger syndrome a superpower: “[I] don’t enjoy participating in the social game that the rest of you seem so fond of.”

This frankness is a powerful tool in her campaign. She has stood in front of global leaders at the World Economic Forum and declared, “Our house is on fire […] We are less than 12 years away from not being able to undo our mistakes.” At the Houses of Parliament, she told MPs, “You lied to us. You gave us false hope. You told us that the future was something to look forward to. And the saddest thing is that most children are not even aware of the fate that awaits us […] that nothing is being done.”