Algae Could Help Feed the World 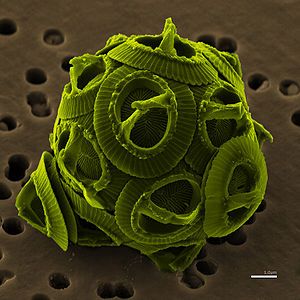 Five years ago, algae was the “it” feedstock in the biofuel realm. The idea of taking an organism that feeds off of CO2 and using it to create fuel was as intoxicating to research scientists as it was to venture capitalists. Financing was available to fund the placement of extremely expensive photobioreactors next to power plants. Decades-old research from the National Renewable Energy Lab proved that some strains of algae could effectively be used to create high-grade fuels. Startup CEOs talked of being able to produce algae-based biofuels cheaply and at a large scale within the three to five years.

Then a few things happened: financing dried up for all sorts of capital-intensive projects, but especially for the more speculative ones like algae-based fuel operations; research teams began to realize how much time and money it would take to find the right algal strains and to really bring algae-based fuels to scale; the issue of distribution infrastructure reared its ugly head; and the venture capital community lost its appetite for expensive cleantech plays, opting instead for software and late-stage investments that mimicked the risk profiles IT plays.

Those changes forced some of the early stars in the algae field out of business, most notably GreenFuel Technologies, which grew out of years’ worth of MIT and Harvard research and received much of the early press around the promise of algal fuels. The companies that remained had to adapt. Fortunately, algae is an extremely versatile resource. Khosla Ventures-backed Solazyme got into green chemistry, producing algae-based versions of palm oil and dielectric fluid (used atop telephone boxes); Seattle-based Blue Marble Biomaterials has shifted its focus to producing flavorings and fragrances–once byproducts from its algae-to-fuel process and now lucrative products; Aurora Algae, which just picked up another $22 million in venture funding last year, is perhaps the most diversified of the algae companies, producing everything from nutraceuticals and pharmaceuticals to palm 0il and animal feed.

Both Solazyme and Aurora are continuing to work on the production of fuel as well. “We are still working on algal fuels, and have the technology to increase our biofuel output once we have the land and there’s an established market, but in the meantime we are producing and marketing other high-value products,” explains Aurora’s vice president of business development Leslie van der Meulen.

While the green chemistry potential of algae has been well-documented, what’s perhaps more interesting is the stuff’s potential to address looming food shortages. Comparing algae to soybeans, van der Meulen notes that the former has a year-round harvest and can produce 38 times more usable protein per acre per year than soy, using one percent of the water that crop needs. “Ultimately, we may not need fresh water at all,” he adds.

The resulting protein can be used in myriad food products and also as both animal and fish feed, which could make algae an important input for the aquaculture industry, which is predicted to grow from 80 million to 160 million tons of farmed fish in the next 20 years. Fish feed for aquaculture is currently made primarily of a fish meal, fish oil, soy and corn, all of which require far more water and energy inputs than algae. Aurora is also using its proprietary strain of algae to produce Omega 3 products for the nutraceutical market.

“The demand for Omega-3s is set to double over the next 30 years and right now there’s no way to fulfill that demand sustainably,” van der Meulen says. “There’s no way there will be enough salmon for people to consume, or that salmon will have the nutrients they have now. Demand is actually already outstripping supply.”

The reason Aurora has been able to diversify its product portfolio so much is largely the particular strain of algae it works with. Dr. Bertrand Vick, co-founder of the company and its chief scientific officer says when Aurora first started, they spent nine months studying various strains, seeing which grew best, and which best fit the criteria for biofuel–an oil content of 30 percent or higher, the ability to grow outdoors (Aurora never got into the photobioreactor game, opting instead for open-air ponds), and the ability to produce the right types of oil. “We found this organism that was not only very suitable for biofuel, but could also be cultivated at a low cost,” Vick says. “Fortunately the cost for producing other high-value products also turned out to be low, which means our profits are pretty good.”

“We like to say sometimes it’s better to be lucky than good,” he jokes. That good luck has also enabled Aurora to produce a variety of products without introducing any genetically modified organisms. “It [the algae] does what it would do in nature, but we push it to its ultimate potential,” Vick says. “We’re able to maximize the value of the strain without introducing foreign genes.”

Aurora is breaking ground on a new plant in Australia at the end of this year and will be producing and selling products into various markets next year. The company also plans to license both its organism and its technology, with various competition limits set on both, to industry, and it currently makes a particular strain of its algae available to universities for research. “We want researchers to be looking at this as well, it helps to elevate algal research overall,” Vick says.

Who knows? Those research teams might even crack the algal fuel conundrum. In the meantime, using algae-based products to avoid energy inputs and replace less sustainable chemicals and feedstocks seems like a pretty good back-up plan.