Posted by henryfool on Wednesday, 26 September 2012 in Recycling

Humans Have Been Recycling For Millennia

A new study by archaeologists from the Universitat Rovira i Virgili and the Catalan Institute of Human Paleoecology and Social Evolution (IPHES) shows that humans were recycling discarded stone tools as long as 13,000 years ago. 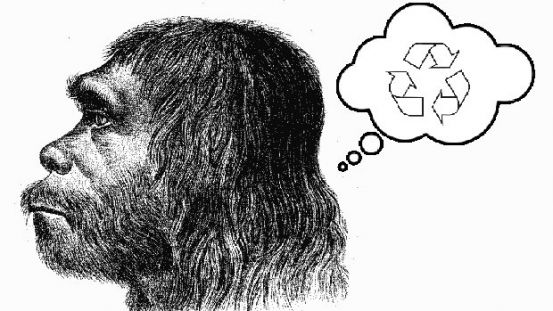 We tend to think that recycling is a modern concept. Back in the 1970s, I remember how novel it seemed to stop tossing aluminum cans and save them in a designated “RECYCLING” bin. Once it was full, my sister and I joined our dad in a can-stomping fest in the backyard, carefully flattening every can before loading them back into the bin and dropping them off for recycling at Safeway’s. Now, of course, recycling means dragging a couple of bins loaded with plastics, paper and more to the curb to be picked up.

But we’re kidding ourselves to think that the 1970s environmental movement ushered in, along with Earth Day, a new era of sustainability. There’s no question that the 19th century Industrial Revolution created a terrible new era of waste and pollution from factories, locomotives and other technological innovations powered by coal. Indeed, the ancient Romans simply threw their household and other (chamber pot) sort of waste straight into the streets (though Rome did have sewers and a goddess, Cloacina, of them).

Go back to the Upper Palaeolithic, the Late Stone Age, and there is evidence that humans in the Molí del Salt site in Tarragona in northeast Spain were engaging in sustainable practices. Archaeologists have found that, 13 millennia ago, humans recycled stone tools for other uses, says research in the Journal of Archaeological Science.

As Manuel Vaquero, researcher at the Universitat Rovira i Virgili, notes, it is not easy to determine the re-using of tools for a different function than originally intended. Only after finding a “high percentage of burnt remains” at the Molí del Salt site were he and other archaeologists able to tell that some stone tools had been modified for use after being burnt.

As Science Daily says, recycled tools were those “more common for domestic activities” and, it seems, “associated with immediate needs.” In contrast, tools for hunting (sharp projectiles) were rarely made from recycled artifacts as “recycling is linked to expedited behavior, which means simply shaped and quickly available tools as and when the need arises.”

In particular, “double artifacts,” which combine two tools within a single item, were more likely to be recycled. The tools were most likely not originally meant to be double artifacts but “a single tool was made first and a second was added later when the artifact was recycled,” Vaquero says. That is, the recycling of an artifact shows that humans in the Upper Paleolithic were able to see more than one use from a tool and then to make necessary modifications.

Recycling was also to early humans’ economic advantage as it “increased the availability of lithic resources, especially during times of scarcity.” Humans would not have to find raw materials to make tools, a task requiring them to wander far from camp and expose themselves to dangers.

Currently we each generate about 2.6 pounds of garbage a day; this year, the world is on track to generate 2.6 trillion tons of garbage. If our earliest ancestors could recycle,  nothing should prevent us from striving to make the global garbage heap not larger, but smaller.