Posted by GreenDog on Thursday, 10 December 2020 in Sustainable Development

Helium push could have world on Russia’s string 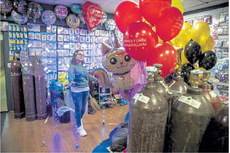 MOSCOW » With a momentary hiss of gas escaping a canister, the limp red balloon suddenly came to life, filled with helium.

After a practiced twirl of her fingers, Anastasia Bukhiyeva, an employee at a party supply shop in Moscow, attached a string, and the balloon floated up to a net under the ceiling, joining dozens of others in this upside-down system of storage.

Russian party balloons are more or less the same as balloons anywhere else but for one distinction: The helium is from Russia.

Soon, though, Russian helium could be used all over the world.

A huge production facility in Siberia is nearing completion, one that some analysts say could disrupt the global market for the lighter- than-air gas, which plays an increasingly critical role in industries such as medical technology, space exploration and national security.

The United States and Qatar together generate the vast majority of the world’s helium. But Russia, already self-sufficient, plans to become a major exporter starting next year.

This ambition, in the works for years now, coincides with the U.S. government’s exit from the helium business after decades as a major supplier. It has raised worries that Russia could bring to helium the same politically influenced trading practices that worry buyers of Russian natural gas and crude oil.

Like oil and natural gas, helium is a finite resource. It is usually extracted as a byproduct of natural gas, and it is slowly becoming scarcer because, once released, it is too light to be contained by gravity and floats into space, lost forever.

And analysts expect demand to rise over time.

Initially, the new Russian supply might lower prices, said Michael Dall, an economist specializing in industrial chemicals at research firm IHS Markit. But longer term, he said, “the dynamics could become more political, something similar to OPEC,” which manipulates prices by raising or lowering the production of oil.

“The geopolitical risks of threats to supply, and potential supply outages, will rise,” Dall said. “And the way demand is going, helium is going to be highly sought after.”

Liquid helium is the coldest thing on Earth, with a boiling point of minus 452 degrees Fahrenheit. This exceptional property, plus the fact that it is not flammable and does not interact with other gases, makes it essential in devices ranging from MRI machines to rocket engines.

Liquid helium circulates inside MRI machines to cool the superconducting magnets that produce the scans that help doctors detect diseases in patients. In space travel, helium is used several ways, including to pressurize tanks of rocket fuel. (It remains a gas even at the low temperatures of liquid hydrogen.) It is useful in welding and in printing computer chips, and if magnetic levitation trains ever take off, it could be a critical resource in that industry, said Christopher J. Cramer, vice president for research at the University of Minnesota, which buys helium for its laboratories.

Given its wide use, “people began to get nervous about helium supply,” Cramer said.

Medical device makers and scientists have questioned helium’s continued use in party balloons, where about 10% of the world’s supply winds up. The American Chemical Society calls helium an endangered element. “Just like certain animals here on Earth, there are endangered elements, too,” the society’s website says. The society recommends that people “opt not to buy helium balloons.”

Siberia holds some of the largest-known untapped reserves of natural gas with high levels of helium, and Russia is preparing for a major leap in production when its new complex of factories comes online next year, operated by Gazprom, Russia’s huge natural gas producer.