Posted by amir on Wednesday, 11 April 2012 in Ocean/Seas/Coastlines 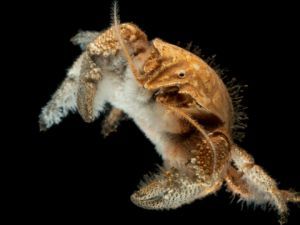 Before the late nineteenth century, most people believed the deep sea was a barren wasteland, unable to support life even in its simplest form. After several expeditions by naturalist Charles Wyville Thompson, the world came to realise life not only exists, but prospers in the depths of the ocean. His three-year voyage on the HMS Challenger produced detailed illustrations of alien-like sea cucumbers, ethereal jellyfish and strange corals all thriving at 3,000 fathoms below.

Even after such discoveries, it took decades to fully understand the extent to which such underwater habitats exist. There aren’t simply a few deep sea dwellers here and there, but entire ecosystems flourishing without the sunlight and air humans had deemed essential for sustainable life.

How can life be so prolific so far from the surface of the ocean? The answer may lie in volcanic activity below the ocean floor, which unearths crucial minerals – creating hydrothermal vents.

These vents are formed when sea water seeps into volcanic rifts within the ocean floor, explains Dr. Jon Copley, from the National Oceanography Centre. The magma below heats the water, which reacts with surrounding rocks to create a mineral-rich fluid that eventually erupts forth from the earth. As the liquid cools, “chimneys” form and create metal-rich deposits. Such deposits contain polymetallic sulphides that are rich with zinc, lead, copper, gold and silver, and polymetallic nodules composed of manganese and iron.

The vent fluid also contains the chemicals needed for chemosynthesis, the process upon which deep sea microbes depend - just as plants require photosynthesis, Copley says. Around the towers of black smoke, silvery sea cucumbers and translucent shrimp feed on the chemosynthetic microbes and the circle of life begins.

Today, the same minerals that draw life towards the vents are now attracting the attention of powerful global mining companies.

Exploratory mining is already in progress in the Clarion-Clipperton Zone in the Equatorial North Pacific Ocean. Japan, China, Korea, France, Russia and Germany all have approved sites in the zone, along with the Interoceanmetal Joint Organization, comprised of sponsors from Bulgaria, Cuba, the Czech Republic, Poland, Russia and Slovakia.

The next frontier is the Indian Ocean, where Copley just spent several months studying the ecology of deep sea vents on the Southwest Indian Ridge. His team believes they have discovered new species during their expedition, like Rimicaris shrimp, Kiwa yeti crabs and scaly-foot snails, which likely only inhabit vents within the area.

The SW Indian Ridge is an ultra-slow spreading ridge, meaning there is less volcanic activity in the area. As a result, vents are spread further apart and tend to have longer life spans, sometimes lasting for millennia, whereas vents in the Eastern Pacific experience frequent natural disturbances like lava flows and earthquakes. Mineral deposits are greater in ultra-slow spreading ridges, making them desirable locations for exploration. Copley fears species could be ‘pushed towards extinction’ if mining is eventually permitted in such regions.

‘If you start mining at vents, a key concern is whether you will be disturbing the system more frequently than nature does--and if so, there could be impacts,’ says Copley, who believes sites must be assessed on a case-by-case basis.

When vents naturally die, species move to another vent in the area. Destroying vents within a vent field leaves fewer options for homeless creatures. ‘We have a network of island-like colonies of species at deep-sea vents, and what happens if you remove some of the nodes of the network - could it collapse for some species, in some parts of the ocean where vents are further apart?’ Copley says.