Posted by bchristo on Tuesday, 22 November 2011 in Food 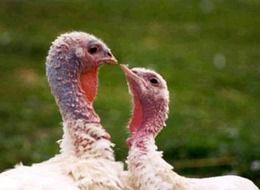 No roast turkey with cracklin’ brown skin graced the groaning boards. Nor was there a pat of butter in sight to slather on the rolls, or a poof of whipped cream to dot the pumpkin pie.

Yet, none of these trimmings were missed among the The more than 200 people who partook of the vegan victuals at the eighth annual Turkey-free Thanksgiving last year at the WorldBeat Cultural Center all in Balboa Park. communal celebration was presented by the Animal Protection and Rescue League, all a local grassroots nonprofit that works to document and expose animal cruelty and educate the public on animal issues.

“You don’t have to stick with tradition to celebrate,” said Alex Metz, outreach director for the animal rights group. “This is our chance for vegans to eat really well and have a decadent, wonderful meal that can still be cruelty-free and really healthy and environmentally friendly.

“It also gives us the opportunity to invite people who are not vegan who think of Thanksgiving as turkey and gravy and introduce them to this new way of eating.”

Metz, 23, a vegan for a year, said her family, including her chef father, have been supportive, but are used to traditional meat- and dairy-laden holidays.

“We had a couple of setbacks last Thanksgiving,” she said. “They forgot and put butter in the mashed potatoes.”

Wearing a gray T-shirt with a turkey on it holding a sign that read “Eat Tofu,” Tanya Selz of Normal Heights said she hasn’t eaten meat for 34 years and typically doesn’t celebrate Thanksgiving. But she welcomed the solidarity of Saturday’s herbivorous repast.

“I used to get a lot of flak from my family,” Selz said. “My cousin said that a vegetarian Thanksgiving is like taking a shower in a raincoat.”

Helen McKenna of Bay Park said she stopped eating turkey about 15 years ago after a visit to an animal sanctuary in Northern California.

“I met a turkey whose name was Fabian,” McKenna said. “He was a very nice bird.”

Bryan Pease, both 33, co-founder of the Animal Protection and Rescue League, has been a vegan since he was a teen. He well remembers Thanksgiving meals with his extended family who did not understand his lifestyle.

“When I was 16, 17, 18, having Thanksgiving at my grandparents’ and aunts’ and uncles’, everybody would say ‘You are just being difficult.’

“But I love food and Thanksgiving is all about the food and eating and being with family and friends,” Pease said. “And there is nothing better than mashed potatoes and gravy. The only thing that can’t be made vegan is the bird.”

That’s where the Tofurky roasts come in.

Seth Tibbott invented the faux fowl product because he was tired of holiday meals eating nothing but mashed potatoes.

“Tofurky grew out of Thanksgiving failures that I have had as a vegan, like the stuffed pumpkin that collapsed and the gluten roast that you couldn’t cut with a chain saw,” Tibbott said.

Over the holidays this year, Turtle Island Foods expects to sell 350,000 Tofurky roasts, which are made from organic, non-genetically engineered soybeans, phyto wheat gluten and seasonings. When it first hit the marketplace in the early 1990s, sales just reached 500 roasts.

“I keep hearing it is very reminiscent of the white meat of a boneless breast of turkey,” said Tibbott. “Sometimes, if it is sliced too thick, it is not as turkey-like as when it is sliced thin.”