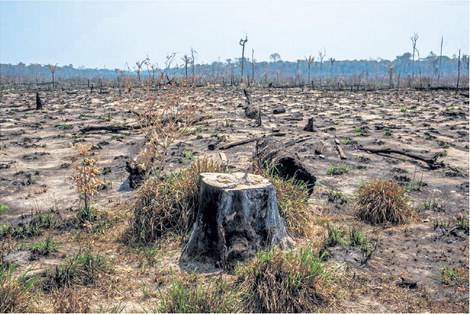 BILLINGS, MONT. » The Biden administration announced Tuesday it will consider a ban on new mining on large expanses of public lands in Western states to protect a struggling bird species, the greater sage grouse.

The Interior Department review comes in response to a federal court order and is expected to cover millions of acres of sage brush habitat considered crucial to the bird’s long-term survival.

A temporary ban on mining was imposed under former President Barack Obama but dropped by the Trump administration. The affected lands totaled 10 million acres in Idaho, Nevada, Montana, Oregon, Utah and Wyoming.

Millions of sage grouse once roamed the West. Development, livestock grazing and an invasive grass that encourages wildfires reduced the species population to fewer than 500,000. The quirky birds with long, pointed tail feathers are known for the male’s elaborate courtship display in which air sacs in the neck are inflated to make a popping sound.

Scientists with the U.S. Geological Survey said last month that greater sage grouse numbers across 11 Western states are down 65% since 1986.

The Obama administration in 2015 declined to place the bird under the protection of the Endangered Species Act, citing the mining withdrawal and plans to prevent development in the most important areas for sage grouse.

Under President Donald Trump, Interior officials said mining or grazing would not pose a significant threat to sage grouse.

U.S. District Judge B. Lynn Winmill said in February that the Trump administration ignored prior science on the issue, including a 2017 government study that concluded restrictions on new mining would avoid impacts to hundreds of sage grouse breeding areas.

Michael Saul with the Center for Biological Diversity, which challenged the Trump decision, said the Biden administration needs to move quickly to avoid a rush of mining claims in the affected areas that could lock in future development.

The National Mining Association has said blocking mining across such a large area would be unreasonable and that the science used by the Trump administration was correct. Spokesperson Conor Bernstein said the court’s order “does not ultimately mean that the BLM will move forward with the withdrawal.”

“We believe the scientific evidence on sage grouse conservation and public policy considerations regarding the need for domestic minerals to shore up the supply chains for our nation’s energy future will prevail,” he said.