Posted by Angel on Wednesday, 19 September 2012 in Wind 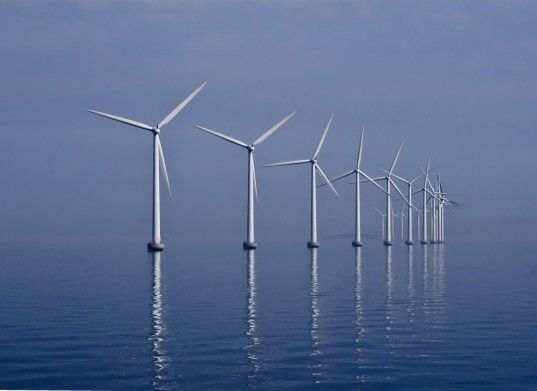 Recent reports have shown that it’s possible to power the entire world with wind power, but scientists at Stanford University conducted a more focused study that delivered the first-ever quantitative analysis of offshore wind energy on the US East Coast. The study states that there is enough wind energy available to fulfill one-third of the US energy demand with thousands of offshore wind turbines.

Focusing on the Maine-to-Virginia corridor—due the region’s general lack of hurricanes—the Stanford team calculated that wind turbines placed there would satisfy the peak-time power needs of the nearby states for three seasons of the year (with summer being the exception).

“We knew there was a lot of wind out there, but this is the first actual quantification of the total resource and the time of day that the resource peaks,” said Mark Z. Jacobson, a professor of civil and environmental engineering at Stanford who led the team. “This provides practical information to wind farm developers about the best areas to place turbines.”.

In their research, the team generated a series of computer models and inserted about 140,000 wind turbines into the scenarios. The model theorized that with each turbine generating 5 MW of electricity, a large wind farm off the East Coast could produce between 965 to 1,372 terawatt hours of electricity annually, enough to satisfy the demands of one-third of the United States.

“People mistakenly think that wind energy is not useful because output from most land-based turbines peaks in the late evening/early morning, when electricity demand is low,” said Mike Dvorak, a recent graduate of Stanford’s Atmosphere/Energy PhD program who was part of the research team. “The real value of offshore wind energy is that it often peaks when we need the most electricity – during the middle of the day.”

The team also added that the wind farm shouldn’t be built at  the expense of ocean views, nor marine life. As such, the turbines would be installed so far offshore that they could not be seen from land. While it will take a lot of funding to implement such a project, the Stanford team hope that their report will act as a guide for placing wind farms in the most rewarding locations.

“The real advantage of wind versus natural gas or coal is that, even though there’s a higher cost now for offshore wind, it results in price stability,” Jacobson said. “There’s zero fuel costs once they’re in the water. Coal and gas are depletable resources, so their cost will inevitably go up over time. The cost of wind energy will remain stable, and the wind resource is infinite.”