Posted by voice on Thursday, 02 February 2012 in Lakes/Rivers/Wetlands 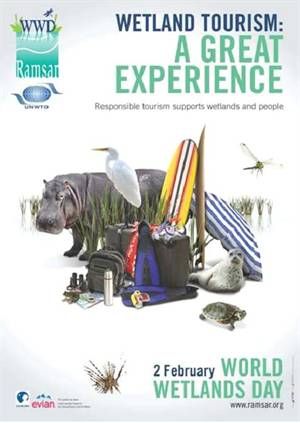 February 2 is being observed as the World Wetlands Day as has been done every year to mark the adoption of the Convention on Wetlands also known as the Ramsar Convention. The Ramsar Convention is a unique treaty in the sense that it is the only global environmental treaty which deals with a particular ecosystem and its membership covers all the geographic regions of the planet.

The aim of observing World Wetlands Day is to raise awareness about the importance and value of wetlands and consequently its conservation. The stated mission of the convention is "the conservation and wise use of all wetlands through local and national actions and international cooperation, as contribution towards achieving sustainable development throughout the world".

Ramsar Convention defines wetlands as "areas of marsh, fen , peatland or water, whether natural or artificial, permanent or temporary with water that is static or flowing, fresh, brackish or salt, including areas of marine water the depth of which at low tide does not exceed six meters" .

Such definition would include rivers, lakes, swamps, marshes, wet grasslands, estuaries, deltas, mangroves, coral reefs, human-made sites such as fish ponds, rice paddies, resoirvior, and salt pans among others. The importance of wetlands in sustaining life on earth cannot be overemphasized as water is one of the most important ingredients for any living being, it is not possible to sustain life for long without water. Besides wetlands serve as breeding and feeding and drinking areas of various wild animals and as stopover for migratory birds which come traveling from one corner of earth to another corner. Wetlands also performs a very important function of maintaining the groundwater level by absorbing water during dry season, this same quality comes in handy in controlling floods. Coming to Manipur, the valley which was predominantly a marshy land dotted with pat or lakes has changed beyond recognition. Almost all of these pats like Lamphelpat, Yaralpat have disappeared, besides ponds have been shrunk or altogether filled up, Khongbans have given way to tiny little drains. There is hardly any water body left in Imphal area to absorb and retain water, consequently we now have drought like situation in dry seasons and floods in rainy seasons. Whatever little water bodies are still left in the greater Imphal area need to be conserved and new water bodies created to help fight this twin scourge of drought and flood. The SPF government had proposed creating a water body in Lamphel area. It is a much needed step and whichever government comes in place of the SPF in the 10th Manipur Legislative Assembly, should make it a reality. As for Loktak lake, it has been designated as a wetland of international importance under the Ramsar Convention on March 23, 1990. The lake is intertwined with the historical, cultural and economic lives of the people of Manipur. But it has been facing many threats for quite some years, most significantly after the commissioning of the Loktak Hydro electric projects. Damming the lake has led to deposition of silts from the catchment areas and hence to its shallowing of the lack and reduction in its water holding capacity. The ever proliferating phums natural and planted by fishermen is yet another serious threat to the lake. Numerous phumdi clearing exercise were taken up from time to time under the aegis of the Loktak Development Authority (LDA) but to hardly any effect. As we observe World Wetlands Day, let there be serious and sincere efforts to conserve Loktak from the state government, the LDA and various other NGOs working in this field. Efforts towards conserving Loktak lake has been invariably mired in controversies for too long. It is clear that there are many vested interest groups who are not really interested keeping the Lake hale and hearty, as it would be tantamount to killing the golden goose for them. This has to change if the Loktak is to be saved from dying a slow death.