Posted by Angel on Tuesday, 31 January 2012 in Lakes/Rivers/Wetlands 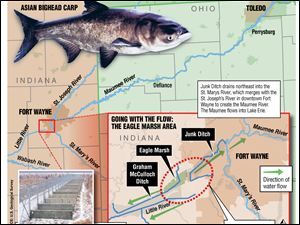 In the grassy belly of a wetland known as Eagle Marsh, Mother Nature decides what water she will send down the Mississippi River to the Gulf of Mexico and which will end up in Lake Erie via the Maumee River.

When one of those adjacent watersheds harbors a finned toxin such as the dreaded Asian carp, this swampy mixing bowl becomes a potential host site for an irreparable breach in the natural and manmade barriers that have, so far, kept the carp out of the Great Lakes and its river systems.

For those with a vested interest in keeping those invasive fish and their trail of destruction from potentially ruining the fishery on the Maumee and the $7 billion a year sport-fishing industry on the Great Lakes, the wolf is at the door.

“The Asian carp are in the Wabash River system, and it’s right there. It’s proximity to the waters of the Maumee in the marsh make that place ground zero in this fight to keep the carp out,” said Paul Pacholski, a Lake Erie charter boat captain for nearly three decades who grew up along the Maumee.

“If they get through that marsh to the Maumee, it’s over. It would be a disaster of biblical proportion.”

The concerns of Mr. Pacholski and many others were heightened recently when a study conducted by the U.S. Geological Survey concluded that if the Asian carp do make their way to the Great Lakes, the waterway where they would most likely spawn and flourish is the Maumee River because its size, flow, and abundant food supply would be ideally suited for the carp.

The place on the Great Lakes where the Asian carp would have the most devastating impact overall, according to the Geological Survey review, is the western basin of Lake Erie — one of the richest fisheries in the world.

Patrick Kocovsky, a research fisheries biologist with the USGS Great Lakes Science Center’s Lake Erie Biological Station in Sandusky, said the study, completed in November, focused on Lake Erie in its effort to determine if the rivers feeding the lake would be suitable for the Asian carp as spawning grounds.

The Maumee, the largest river system feeding any of the Great Lakes, was deemed the most attractive for the carp, followed by the Sandusky and Grand rivers, both labeled as moderately suitable.

“The study gives us a clearer picture of the threat posed by Asian carp to western Lake Erie and its major rivers,” Mr. Kocovsky said.

“I was not surprised about the Maumee being at the top of the list.”

The Maumee is rich in nutrients and microscopic plant growth, and because the dominant species of Asian carp are filter feeders, straining a diet of plankton from the water, they should flourish there, the study determined.

Because these carp grow upward of 100 pounds and consume a quarter of their body weight per day, they monopolize the food source for many other fish and aquatic life forms, collapsing a complex food web in the waterway.

Grass carp were brought to this country to reduce vegetation in rearing ponds on fish farms, and bighead and silver carp have been used to clean sewage ponds. Black carp, the only nonvegetarian in the group, are used to devour snails that carry a parasite that is deadly to catfish raised on commercial fish farms in the South.

Because of serious concerns over the environmental impact of chemicals used to control aquatic vegetation and government mandates for less damaging alternatives, the Asian carp were once considered an environmentally friendly ally.

But when the Asian carp started to escape the fish farms and sewage retention ponds about 40 years ago in periods of flooding, they began making their way into the Mississippi River system.

They have been on a relentless march north ever since, dominating areas in their path. Carp now make up as much as 90 percent of the fish in certain stretches of the Mississippi that once held significant populations of native fish such as bass and crappie.

The Asian carp have spread into the Cumberland and Tennessee rivers in Tennessee as well as a wide range of major waterways in Kansas, Missouri, Iowa, Nebraska, and South Dakota. They also have been documented in the Mississippi River in downtown Minneapolis.

There are two likely routes for the carp to reach the Maumee River and Lake Erie. The first is the Chicago Sanitary and Ship Canal, which connects the Mississippi River system with Lake Michigan via the Des Plaines River.

An electrical barrier is in place there, ostensibly to keep the carp from reaching the lake, although carp DNA has been detected beyond the barrier. A proposal by conservation and environmental groups to permanently close the canal to lock the carp out has been met with a political and legal firestorm because business interests and Chicago politicians deem the canal vital.

The second flash point is in Eagle Marsh, a much more bucolic setting than that surrounding the Chicago canal, which was originally built to carry sewage away from the city and down river toward the Mississippi.

Eagle Marsh is a 716-acre tract just southwest of Fort Wayne. It had been drained 100 years ago to be used as farmland, but persistent flooding drove the farmers out, and the area has been restored within the last decade as a wetlands complex.

Somewhere in the marsh, water drains toward the Little River and Graham-McCulloch Ditch and then works its way to the Wabash River. At another point, water pushes out in the direction of Junk Ditch and the St. Mary’s River, which joins the Maumee River in Fort Wayne, only a few miles away.

The Little and Wabash rivers have established populations of Asian carp, but the Maumee does not. Several recent studies by biologists from Notre Dame University have not detected any Asian carp DNA in Eagle Marsh or in the nearby St. Mary’s River.

Phil Bloom, director of communications for the Indiana Department of Natural Resources, said that although the two rivers and their drainage systems don’t normally connect, their waters can mix during floods.

“Under certain conditions, flooding could commingle those waters,” Mr. Bloom said. “That could, potentially, provide the link that creates a pathway for Asian carp to move from the Wabash to the Maumee and then reach Lake Erie.”

In an effort to disrupt any possible movement of the Asian carp from the Wabash River to the Maumee and on to the lake, in the fall of 2010 the Indiana Department of Natural Resources installed a 10-foot-high, 1,177-foot-long chain-link fence to bisect the marsh.

The project, which cost about $200,000, is expected to be a “temporary” barrier to keep mature Asian carp from reaching the Maumee until the Army Corps of Engineers, along with an assortment of other governmental agencies, can devise a more lasting remedy.

“The thought was that in an ‘if-and-or-when’ scenario, we wanted to have a barrier in place,” Mr. Bloom said.

Although there are a number of species distinct to each river system that biologists do not want to see cross-introduced, the Asian carp are the poster child for invasives in Eagle Marsh.

“My understanding is that if the Asian carp get into the Maumee River, then this is the route,” said Betsy Yankowiak, director of preserves and programs for the Little River Wetlands Project, which includes Eagle Marsh. “It’s a big concern for us and a lot of other people, not just the fishermen.”

Some parties in the carp crisis have cast a skeptical eye toward the fence because its openings allow the free flow of water, and, therefore, fish eggs could easily pass through the links, but Mr. Bloom said the spawning habits of the Asian carp make that very unlikely.

“From what we know about how Asian carp spawn, they need high water, a steady flow, and when they drop their eggs, the eggs tumble downstream for a period of time until they hatch,” he said. “If the Asian carp get to the fence, the conditions are not right to dump their eggs or for those eggs to survive. The eggs will sink and die.”

The closest clusters of carp are believed to be about 20 miles away from the marsh, with the nearest documented spawning area about 60 miles away, but the fish have essentially charged north without much impediment since they washed out of ponds and into the Mississippi during floods in the southern U.S. about 40 years ago.

During a recent high water event in Eagle Marsh, adult common carp were observed swimming along both sides of the fence, but it’s not the big ones of the foreign variety that have Mr. Pacholski, the charter captain, concerned.

“I understand that the fence keeps the mature ones out and that the eggs aren’t supposed to survive up there in the marsh,” Mr. Pacholski said, “but what about the yearlings? They can swim right through the thing and then just a couple years down the road, we’ve got adult Asian carp on the other side.”

Another shortcoming of the fence could be exposed in extreme flood conditions, when a series of gates halfway up the fence might have to be opened to relieve pressure when debris backs up the water and fills the basin.

“They’ll open those gates before they let downtown Fort Wayne be flooded,” Mr. Pacholski said. “And then what happens?”

In the fight to keep the carp out of the Maumee River, the Great Lakes as a whole, and Lake Erie in particular, the stakes are immeasurably high.

With no natural predators and possessing explosive reproductive abilities and an insatiable appetite for the plankton that so many native fish rely on, the Asian carp are a scaly, smelly, grim reaper.

“If the carp get in, there’s no doubt in my mind that in Lake Erie we will have more carp than the other four Great Lakes combined,” said Jeff Reutter, director of Ohio Sea Grant, a statewide program that supports knowledge and stewardship of the Great Lakes and is part of the National Oceanic and Atmospheric Administration sea grant college program. “They need the high nutrient conditions present in the western basin to thrive. We’ll have far more than anyone else, if they get in.”

If the fish enter through the Chicago canal, it could take a decade or more for them to traverse the length of Lake Michigan, then move south through Lake Huron and pass into Lake Erie through the Detroit River.

The route through Eagle Marsh and directly into the headwaters of the Maumee River essentially eliminates that theoretical time line.

“If there was ever a place perfectly designed by God for Asian carp, it’s Lake Erie, especially the western basin,” said Dave Kelch, an extension specialist with Ohio Sea Grant.

Ray Petering, the recently retired executive administrator of the fish management group at the Ohio Division of Wildlife, said in a Sea Grant update on the crisis that it is a one-strike-and-you’re-out game with the Asian carp and its threat to the Great Lakes. “Once they gain access to the large systems, like the way these carp did with the Mississippi River,” he said, “the game’s over.”

For Mr. Pacholski, the environmental watchdog for the Lake Erie Charter Boat Association, patience is in short supply.

“We don’t need any more studies or any more Band-Aids put on the problem. Look at the Mississippi River. The Asian carp take over everywhere they go. We are at a tipping point right now, and our lake and the Maumee River are in serious jeopardy,” he said.

“They haven’t been stopped anywhere else, and if these carp get in the Maumee or the lake, the western basin will be overwhelmed in eight to 10 years. A disaster like we’ve never imagined is a real possibility.”